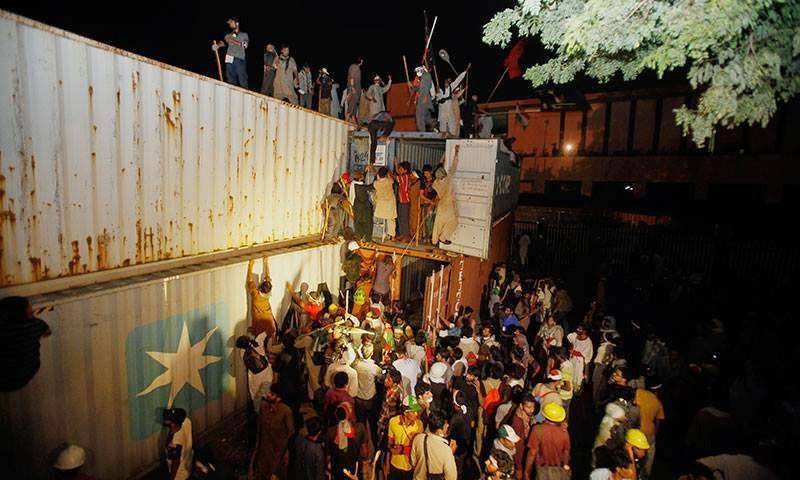 ISLAMABAD - Police in Islamabad have started cracking down on Pakistan Tehrik e Insaf (PTI) and have arrested at least 120 members of the Insaf Students Federation (ISF).

Video footage showed police and Frontier Constabulary personnel baton-charging and taking away PTI workers in a bus from the venue of the convention.

A scuffle broke out between the law enforcers and senior PTI leader Shah Mehmood Qureshi, who argued with the personnel for demanding an explanation for the arrests.

"Peaceful protest is our constitutional right. On whose orders did they raise their arms to attack these peaceful workers? Why are our workers being arrested?" asked Qureshi, who was visibly angered. He was soon accompanied by senior PTI leader Asad Umar.

"This act has proved what Supreme Court said…that there is monarchy and not a democracy in Pakistan," said Umar speaking to reporters.

"I appeal to Islamabad administration. We are legislators. IG Islamabad, commissioner Islamabad, tell us on whose orders this action was carried out? Who asked them to raise their hands against women exercising their right of peaceful protest. Did you see weapons in their hands?" said Qureshi.

Meanwhile, the government claimed the PTI had not sought permission from the Islamabad administration for the youth convention.

Speaking to Geo News, PML-N leader Danial Aziz claimed that planning was underway at the PTI youth convention to lock down the federal capital.

Aziz said the PTI wanted to go ahead with its planned shutdown of Islamabad despite court orders.

"The matter is not so simple; we were aware of the proceedings inside the building where the convention was being held," he added. "Should we wait for them to come and force people to close down their offices, and then take action."

PTI Chairman Imran Khan has urged all his workers hold massive nationwide protests on Friday against the police crackdown on PTI workers in Islamabad.

Talking to Samaa News shortly after the police crackdown, Imran Khan said “We are going to protest all over Pakistan tomorrow for the way they’ve manhandled our workers, including our women.”