WWF, The Coca-Cola Foundation join hands for World Without Waste 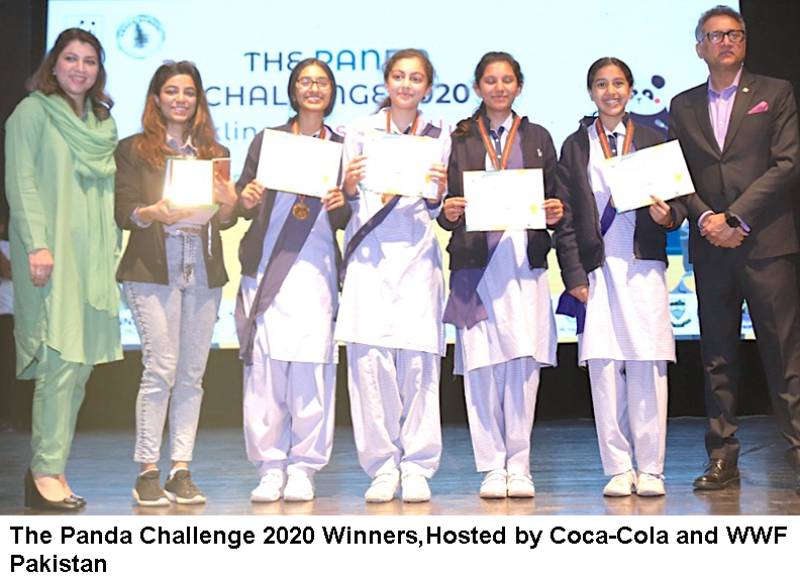 LAHORE - WWF-Pakistan and The Coca-Cola Foundation collaborated to host the finale of ‘The Panda Challenge 2020’ school competition organized at the Ali Institute of Education in Lahore on Tuesday, February 25, 2020.

The event was graced by the presence of chief guest Minister for Provincial Assembly, Sumera Shams who distributed medals, shields and certificates to all the winners in the presence of top management officials from WWF Pakistan and Coca-Cola. This grand finale was the third and final stage of the school engagement program, prior to which orientations and activities took place in schools involving over 30,000 students who competed to be shortlisted as semi-finalists and finalists.

The Panda Challenge is an interschool activity which brings together students from grade 1 to 8 from different schools. The 2020 Challenge was organized to not only help raise awareness about the environment but to create a platform that helps the youth in honing their public speaking abilities, mental faculties, artistic endeavours and creative writing capabilities around the theme of plastic pollution. The event’s aim was to promote healthy competition and to rouse the academic curiosity of students through activities like quizzes, rapid-fire rounds, masking posters, creative writing, speeches and debates. Prior to the Lahore event, the finales of Islamabad and Karachi were organized on 12th and 19th of February respectively.

Following the success of The Panda Challenge 2019, The Coca-Cola Foundation collaborated with WWF-Pakistan through its World Without Waste initiative, that spreads the message of action against plastic pollution across 100 private and government schools around the nation; about how plastic can be used responsibly and that the solution to mitigate plastic pollution requires a collective effort.

Fahad Qadir, Director Public Affairs & Communications at The Coca-Cola Export Corporation for Pakistan & Afghanistan regions stated, “Coca-Cola has partnered with WWF to create awareness around safe segregation and disposal of plastics to mitigate the impact of plastic pollution. Our youth is the torchbearer and through initiatives like The Panda Challenge, we want to reach out to over 100 schools and hundreds of families to disseminate helpful information around plastic waste management since educational awareness has an exponentially positive impact on our society. We are excited to be part of this journey with WWF and we aim to reduce, reuse and recycle our packaging waste by 2030.”

Hammad Naqi Khan, Director General, WWF-Pakistan added, “It has always been our prerogative to engage in educational pursuits that not only enlighten but impart knowledge and help the youth gain a fresh perceptive on the importance of the environment and its conservation. The idea behind such an all-inclusive inter-school event was to make the younger generation cognizant of key environmental issues and challenges through a host of activities so that they not only know but grow up to be enlightened citizens heralding in change that we so desperately need. We’re very proud of hosting and organizing such events and will continue to do so to spread the message of a clean and safe environment.”

Through this challenge, the environmental education program of WWF-Pakistan brought together students on one platform to expand their academic horizons by focusing on environmental issues and for giving them an opportunity to express their concerns, focusing on solutions and getting a fresh perspective through interaction and discourse.