What developing India-US ties mean for the fate of Kashmir 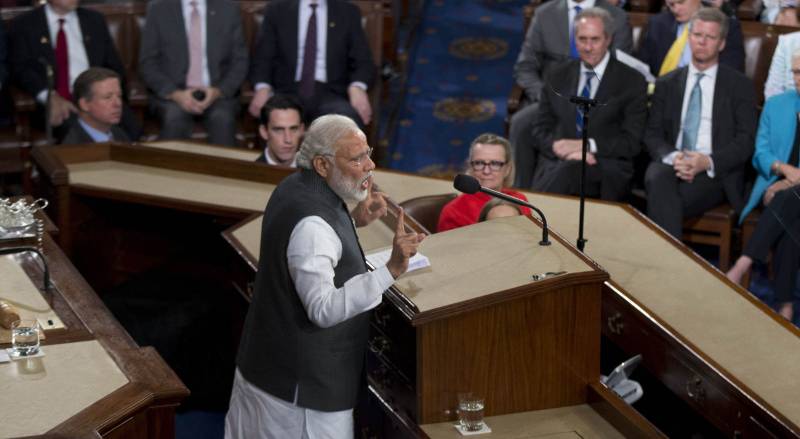 Is it true Narendra Modi just boarded a flight to visit India?” tweeted a critic of the Indian Prime Minister’s globe-trotting tours. “Welcome home, Pradhan Mantriji! How long will you be staying this time?”

Modi has already been to 33 countries just this year alone. And on June 7, 2016, the Donald Trump of South Asia, who has promised to make India great again, marked his fourth visit to the U.S. since taking office in 2014.

An Indo-US joint statement issued on the occasion is noteworthy for its lack of any real substance: "The leaders reviewed the deepening strategic partnership between the United States and India that is rooted in shared values of freedom, democracy, universal human rights, tolerance and pluralism, equal opportunities for all citizens, and rule of law.”

This is just some more opium for the masses. Public rhetoric has become a kind of camouflage to disguise inconvenient truths. It’s an interesting and perhaps appealing thought that Modi would be sitting around contemplating universal human rights with major foreign leaders, but I’m sure we would be hard pressed to find these subjects on the agenda of more important meetings. These are the classic subjects of speech-making which call forth the highest virtues of mankind.

There are indeed certain appearances to be maintained, but behind the scenes it's an entirely different ball-game.

In a speech to the United Nations in September 2015, President Barack Obama said:

“There are those who argue that the ideals enshrined in the U.N. charter are unachievable or out of date -- a legacy of a postwar era not suited to our own. Effectively, they argue for a return to the rules that applied for most of human history and that pre-date this institution: the belief that power is a zero-sum game; that might makes right; that strong states must impose their will on weaker ones; that the rights of individuals don’t matter; and that in a time of rapid change, order must be imposed by force.

“On this basis, we see some major powers assert themselves in ways that contravene international law. We see an erosion of the democratic principles and human rights that are fundamental to this institution’s mission; information is strictly controlled, the space for civil society restricted. We’re told that such retrenchment is required to beat back disorder; that it’s the only way to stamp out terrorism, or prevent foreign meddling.”

Such a speech would have been quite appropriate on June 7, 2016. It’s an interesting statement that applies to a number of countries in the world whose territories are either occupied or under direct attack, whose human rights are constantly violated, where civil society is restricted by the ever-present terror of living with foreign troops; and none could be more conspicuous than Kashmir.

While I am convinced that President Obama has been sincere in expressing such views, I am deeply dismayed that he would not utter a word even in private to Prime Minister Modi, his guest, about India’s imposition of such conditions on Kashmir. Are we in such a rush for profits from business ventures that we can just walk away from our basic values?

The U.S. was once considered a shining example to the rest of the world of what democracy could be, and yet now, we see a complete breakdown of this grand vision at its very source. What is the significance of an alliance between the great democracy (US) and so-called largest democracy in the world (India) when universal principles, democratic values and human rights are compromised?

The U.S. alliance with India is somewhat convoluted when considering the broader picture. Of supreme importance is China and it specifically takes into consideration China’s relationship with Russia. U.S. neocons have long had both Russia and China in their sights. Both countries represent a threat to America’s economic and political dominance in the world. India has nurtured ambitions of becoming a regional power, and it seems that an alliance with the U.S. is little more than a piggyback ride designed to further that aim. India would then be a partner in U.S. hegemony, benefiting politically and economically from such an arrangement.

The current buildup of NATO along Russia’s border has long been intended, from a policy standpoint, as a precursor to war with China. Although President Reagan brought a halt to the cold war and rid the U.S. administration of its warmongers, since the George W. Bush administration, there has been a resurgence of the notion of American exceptionalism through policies, such as sanctions, that intend to destabilize Russia which then would in turn weaken China.

I don’t think there’s any question that Prime Minister Modi understands this. The alliance between the U.S. and India therefore has to be viewed as tactical rather than strategic. The two are not making wedding vows, they are just on a date, having a nice romantic dinner together. India isn’t giving up its relationship with China; it’s just like any other enterprising capitalist who, in political elections, donates to both sides in order to always be on the winning side.

India’s attitude toward Pakistan has to be viewed in such a context as well. Obviously still quite hostile on the surface, Prime Minister Modi’s remarks during his speech to the U.S. Congress blamed Pakistan for much of the terrorism in the world. Since 1950, China has been a close ally of Pakistan, supported the country in its opposition to the Soviet invasion of Afghanistan, and has stood with it on Kashmir. Yet Prime Minister Modi’s warm embrace of Pakistan’s Prime Minister Nawaz Sharif late last year also needs to be taken into account in trying to understand what the long term strategy of India is, if it can be understood at all.

Perhaps the gesture was genuine, and on the other hand, possibly nothing more than propaganda - like frosting on a wedding cake that was never intended to be eaten. The subsequent arrest of alleged Indian spy Kulbhushan Jadhav in Pakistan, the Pathankot terrorist attack and Nawaz Sharif’s dwindling power at home politically may have diminished, some say intentionally, any immediate prospects for negotiation, despite assertions to the contrary.

The future of Kashmir, of course, is deeply linked to the fate of the India–Pakistan relationship. A closer friendship between India and Pakistan, with agreements for trade and cooperation, would give Kashmiris some hope. It would give us all a sense that dialogue would eventually drift towards the crucial issue of Kashmir which is the underlying cause of tensions between the two countries. But deeper ties between India and the U.S. certainly constrains the latter’s hand in addressing any concerns regarding India’s human rights violations in Kashmir, which makes for a difficult future without much hope for change in the near outlook.

Although John Sifton, Asia Policy Director, Human Rights Watch, said during a Congressional hearing with Modi present: “It is a false claim, made by some in India and the United States, that because India is a democracy and an ally, the United States should remain silent about India’s record,” it takes courage and leadership which seems quite absent in current talks.

Kashmir was, to our knowledge, never mentioned during Modi’s meeting with the U.S. Congress. No one asked the hard questions. Instead, a man who was, until just two years ago banned from entering the U.S. because of his suspected involvement in the Gujarat massacre, was greeted with three minutes of applause when he entered the Chambers. Another 63 rounds of applause followed. While India could rejoice, this was hardly a reason for optimism for Kashmir. Money and morality tend to be quite incompatible, wear different robes, and have different rituals.

When the joint statement reaffirmed the two leaders “support for a reformed UN Security Council with India as a permanent member,” President Obama conveniently overlooked the fact that the United States was the principal sponsor of the resolution the Security Council adopted on April 21, 1948 which states that the future of Kashmir shall be decided by the people. How can India become a member of this Council when she has not fulfilled the commitment that she made to Kashmir at this forum?

There is no question that human rights in international affairs has almost no standing unless it can be usefully served as a weapon against those who refuse to go along with the game plan. Human rights are now apparently completely ignored among those who do go along, particularly when successful business opportunities are at hand.

Kashmiris have no other option but to reinforce their resolve in raising these issues along with the promise of self-determination at every forum where possible. The world must constantly be reminded of Dr. Martin Luther King’s statement, “History will have to record that the greatest tragedy of this period of social transition was not the strident clamor of the bad people, but the appalling silence of the good people.”