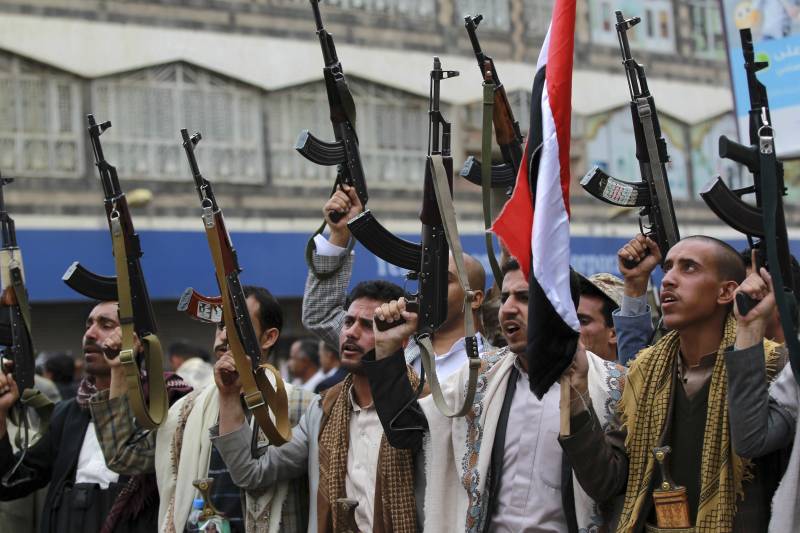 At least 39 civilians have been killed in Saudi-led Operation Decisive Storm against the Huthis and their allies, officials at the rebel-controlled health ministry in Sanaa said.

Explosions and crackles of small gunfire rang out across Aden late on Friday as Houthis made a push on the southern port city's airport, a witness said.

The advances threaten Hadi's last refuge in Yemen and potentially undermine the air campaign to support him.

The spokesman for the Saudi-led operation, Brigadier General Ahmed Asseri, told a news conference in Riyadh that defending the Aden government was the campaign's "main objective".

"The operation will continue as long as there is a need for it to continue," Asseri said. He added that planes from the United Arab Emirates had carried out their first strikes in the past 24 hours.

In a boost for Saudi Arabia, Morocco said it would join the rapidly assembled Sunni Muslim coalition against the Houthis. Pakistan, named by Saudi Arabia as a partner, said it had made no decision on whether to contribute.

Riyadh’s military intervention is the latest front in a growing regional contest for power with Iran that is also playing out in Syria, where Tehran backs Assad’s government against mainly Sunni rebels, and Iraq, where Iranian-backed Shia militias are playing a major role in fighting.

Sunni monarchies in the Gulf are backing Hadi and his fellow Sunnis in the country's south against the Shia advance.

US President Barack Obama expressed his support for the Saudi-led military action in a phone call with Saudi King Salman on Friday, the White House said.

In his first reaction to the attacks, Houthi leader Abdel-Malek al-Houthi on Thursday called Saudi Arabia a bad neighbour and "Satan's horn", saying in a televised speech Yemenis would confront the "criminal, unjust and unjustified aggression".

Mosques in Riyadh on Friday preached fiery sermons against the Houthis and their Iranian allies, describing the fight as a religious duty. Saudi Arabia's top clerical council gave its blessing to the campaign.

In the Iranian capital Tehran, Friday prayer leader Ayatollah Kazem Sadeghi described the attacks as "an aggression and interference in Yemen’s internal affairs".

Iran has denounced the assault on the Houthis and demanded an immediate halt to Saudi-led military operations.

While US officials have downplayed the scope of the ties between Iran and the Houthis, Saudi ambassador to Washington Adel al-Jubeir said members of Iran’s Revolutionary Guards and Iranian-backed Hezbollah are on the ground advising the Houthis.

The Saudi military spokesman said there was no plan at this stage for ground force operations, but if the need arose, Saudi and allied ground forces would repel "any aggression."

The US military Friday rescued two Saudi pilots who ejected from their jet off Yemen's coast, officials said.

The Saudi F-15 fighter jet appeared to be participating in the operations in Yemen, though a US defence official declined to confirm why the men ejected from the plane or why it went down in international waters late Thursday.

The official said Saudi authorities had enlisted Washington's help in the rescue efforts.

It only took the US military about two hours to rescue the men after being first notified they had ejected from their plane.

The two men, who were rescued by an HH-60 helicopter from Djibouti, were in fit enough a condition to walk, the official added, citing initial reports.

Sunni-ruled Saudi Arabia has vowed to do "whatever it takes" to prevent the fall of Yemen's embattled President Abedrabbo Mansour Hadi, accusing Shiite Iran of "aggression" and backing a months-long rebellion by Houthi fighters.

On the other hand, Hassan Nasrallah, head of Lebanon's pro-Iran movement Hezbollah, said Friday Saudi Arabia will be roundly "defeated" in its air campaign against Yemen, calling on Arab leaders to stop the "aggression".

"The outcome of this war is clear: Saudi Arabia will be defeated and the Yemeni people will have an undeniable victory," Nasrallah said in a televised speech.

Hezbollah is now militarily involved in Syria, where it is bolstering the embattled regime, and in Iraq where it says it is fighting Sunni extremists. Hezbollah firmly criticised the operation, calling it "unjust" and "illegal".

"It is the right of the oppressed... Yemeni people to resist and defend... and that is what they are doing," Nasrallah said, calling for a political solution to the conflict.

The Hezbollah chief launched into a strongly worded diatribe against the Saudi kingdom, accusing it of launching air strikes against Yemen to "regain its hegemony" over the country.

"The problem is you - you failed. Your way of doing things failed," he said, addressing the Saudi leadership.

"Saudi leaders have one last chance before they are defeated and humiliated, and that is to behave with the Yemenis like brothers and to begin a dialogue while the door is still open," Nasrallah said.

He called on the Arab League, "instead of being complicit in the bloodshed in Yemen, to assume a historic responsibility by stopping this aggression and moving towards a political solution."

"Otherwise, defeat and shame will meet the invaders," Nasrallah warned.

A two-day Arab League meeting from Saturday in Egypt's Red Sea resort of Sharm el-Sheikh is expected to be dominated by the Yemen crisis.