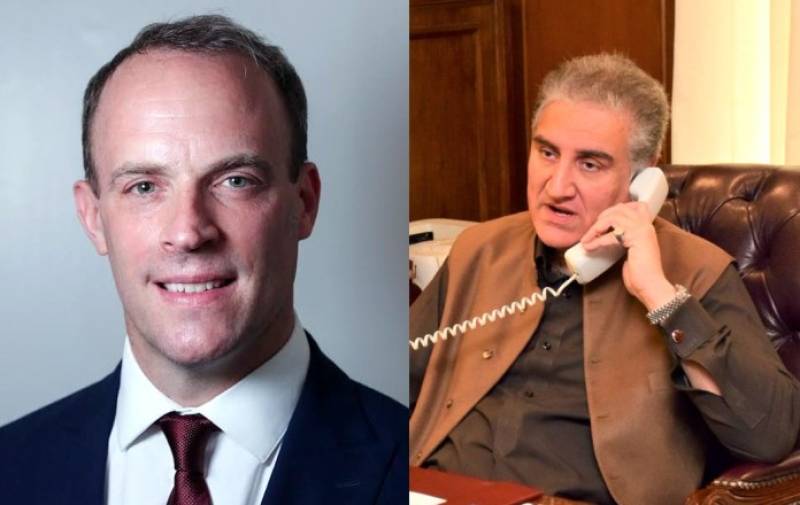 ISLAMABAD – Pakistan's Minister for Foreign Affairs Shah Mahmood Qureshi Saturday held a telephonic conversation with British Secretary of State for Foreign and Commonwealth Affairs Dominc Raab and exchanged views on the global outbreak of coronavirus and prospects of enhanced bilateral cooperation to jointly tackle the pandemic.

Expressing condolences over the loss of life in the United Kingdom by the coronavirus, the foreign minister conveyed his good wishes for early recovery of Prince Charles and British Prime Minister Boris Johnson, who had also been tested positive for the Covid-19 disease.

Qureshi apprised his counterpart that the British nationals residing in Pakistan were being taken care of and assured of their return after the normalcy.

The foreign minister lauded the steps being taken by the UK authorities to combat the infectious virus and thanked British authorities for taking care of the Pakistani community in the UK.

He informed Foreign Secretary Raab about the latest situation of outbreak in Pakistan and the steps taken by the government for its containment.

LONDON - British Prime Minister Boris Johnson on Friday confirmed that he has tested positive for the coronavirus, ...

While highlighting the situation in the Indian Occupied Kashmir, the foreign minister said due to the Indian lockdown for the last eight months, the territory had been facing shortage of food and medical supplies to effectively contain the Covid-19 pandemic and around eight million Kashmiris were awaiting the world support for their riddance from the Indian oppression.

Foreign Minister Qureshi also reiterated the need to lift sanctions against Iran, enabling it to utilize its resources to save precious human lives.

He highlighted that the debt relief for developing countries like Pakistan would enable them to devote greater resources to fight the Covid-19 pandemic and mitigate its economic fallout.

He said the United Nations secretary general and the managing director of the International Monetary Fund had also given encouraging remarks in that regard. He hoped that being a member of the G-7 and G-20 countries, the UK would play its role to carry forward the said proposal.

LONDON – Prince Charles, the heir to British throne, has tested positive for coronavirus, Clarence House has ...

The British foreign secretary thanked the foreign minister for the call and his expression of solidarity. He concurred that enhanced global cooperation was key to combat the pandemic.

He hinted at raising the proposal of restructuring of the loans at the appropriate forum.

Both the sides agreed to keep up the consultation for mutual cooperation against the pandemic.