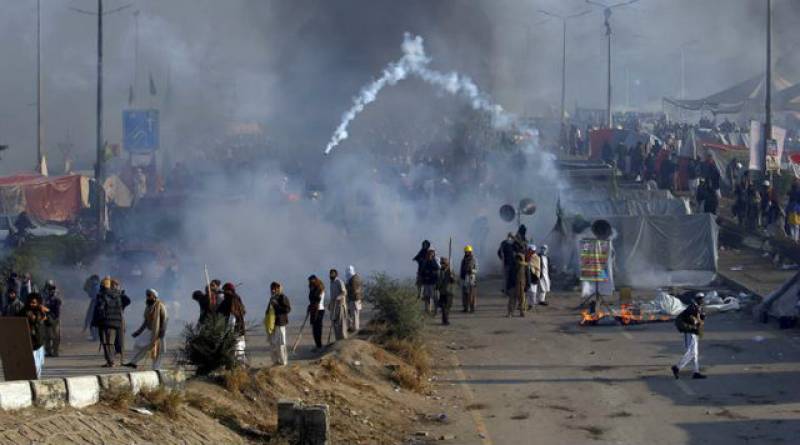 RAWALPINDI - The two police officials, who were allegedly abducted by the protesters during Islamabad sit-in, have been released after severe torture at a time when the religious group called off the sit-in following an agreement with the government.

A patrol team of police found them lying on a road in Rawalpindi with marks of torture, broken bones and bruises on Monday. The injured were shifted to the District Headquarters (DHQ) Hospital for treatment, from where they had been kidnapped.

Doctors said that they were beaten with sticks and wires as the officials sustained internal injuries, adding that left elbow of an officer named sub-inspector Aslam Hayat was fractured.

“Both SI Aslam Hayat and Amanat Ali were ruthlessly tortured by the kidnappers and were detained in a makeshift tent in Faizabad after they were kidnapped,” Dawn quoted the deputy superintendent of police (city circle). He added that the police will record their statements.

Media reports suggest that further sections of law will be included in the FIR already lodged with the Ganjmandi police station regarding their alleged kidnapping.

The protesters had allegedly kidnapped them when they were at the DHQ hospital for the autopsy of those killed during clashes between forces and agitators on Saturday. Both officials were abducted after they refused to write what the protester wanted them to write.

The police had also registered a case against unknown persons regarding the violence erupted on Saturday in which around seven people were killed and several injured.

It is unclear yet that the government has withdrawn the cases registered against the protesters after signing an agreement, which says "All activists of TLYRA, who have been arrested/detained since the start of Dharna (sit-in) from November 6, should be released within three days while cases against them should be withdrawn".