Whatever be cost, Pakistanis not to sit back till Kashmiris given self-determination right: PM Imran 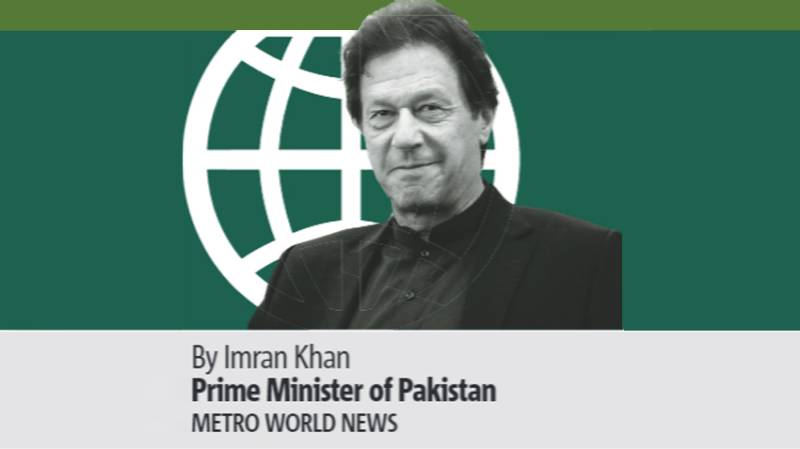 Prime Minister Imran Khan resolved that the Pakistani nation would not sit back until Kashmiris are given their right of self-determination, whatever be the cost.

Prime Minister Imran Khan remarked in his article published in US-based daily Metro New York, “It’s time for the world to decide how long political and economic expediencies would continue to overshadow human values and morals. One can’t hunt with the hound and run with the hare. However, the Pakistani nation will not sit back until Kashmiris are given their right of self-determination, whatever be the cost.”

He said through this write-up, he aimed at shaking the world conscience to the plight of 8 million people of Indian Occupied Jammu and Kashmir. He once again reiterated Pakistan’s desire for peace, nonetheless, peace with honour. Pakistan wishes to resolve this decades-long dispute which has assumed the ugliness of human tragedy, he added.

He said Post-Pulwama face-off bore testimony to the perils of hostilities in nuclearized South Asia. The specter of war was narrowly averted only after Pakistan released a captured Indian pilot for the greater cause of peace.

Post-Aug. 5 Indian government’s illegal strike through so-called constitutional cover against Kashmiris has led to unprecedented worldwide protests. Pakistan has been engaged with all conscious members of the world community to play their role in addressing this gross injustice.

The world at large continues to despise Indian action across the globe while communities with cognizant conscience are expressing their detest against Indian excesses. After the egregious Indian actions of Aug. 5, 2019, and the imposition of a curfew, preceded by additional troops’ deployment in Indian Occupied Jammu and Kashmir, international media, human rights organizations, and many world leaders have expressed concern over the plight of the 8 million caged people of Kashmir and ensuing tensions between India and Pakistan. However, few chose to continue their penchant for business and trade considerations over universal human empathy against human rights violations.

This is a repeat of the same policy of appeasement that led to World War II. The question looms large: Is the world ready for a similar catastrophe? Ironically, this time under nuclear overhang. The prime minister said the world leaders, especially President Donald Trump, are cognizant of the centrality of the Kashmir issue to the peace of South Asia. His recent offer of mediation, not only during my meeting with him, but also at a couple of subsequent occasions, displays his astute understanding that the Kashmir dispute can spiral tensions between India and Pakistan to unimaginable consequences, which may transcend the regional frontiers.

He told the world that Kashmir was not a mere territorial dispute, but a tale of an unfulfilled promise of the right of self-determination to the people of Kashmir, espoused in UNSC resolutions, concurred by founding father of India, Jawahar Lal Nehru.

Over the last seven decades, he said defiant Kashmiris have not acquiesced to Indian occupation, despite paying the heaviest cost in terms of human lives, honour, dignity and of late (since first Modi regime) the pellet guns.

“Kashmiris will not budge to the recent Indian government annexation attempt, nor would the people and state of Pakistan leave them in these testing times,” he resolved. He said India had been exploiting global concerns over terrorism to malign Pakistan by tainting the just freedom struggle of Kashmiris as Pakistan sponsored terrorism. The Pulwama incident was a reaction by local Kashmiri to Indian repression and illegal occupation.

However, Modi’s government used it as an opportunity to score political brownie points in the face of the May 2019 Indian elections. Had Pakistan not displayed political maturity and earnest desire for peace, the region could have plunged into a war with horrible consequences, he remarked.

I must warn the world that India would once again attempt to vitiate regional peace in frustration to the backlash it is likely to face, as and when the curfew restrictions are relaxed. Kashmiris’ reaction to the draconian clampdown, entering into its 50th day, maybe projected as acts of terrorism, and blames hurled on Pakistan.

Post-Pulwama duel had raised the threat of missile strikes on major Pakistani cities. On Feb. 27, 2019, Pakistan comprehensively displayed not only the will and resolve but also the capability to respond to any kind of Indian aggression. Make no mistake that our rejoinder to any future hostilities by India will be no different.

India has been veiling the Kashmir dispute under bilateralism, while concurrently denying any bilateral engagement. India’s obstinate response to our peace offers has brought us to the stage, wherein we do not seek to negotiate until the recent unilateral annexation attempt by the Indian government is reversed, curfew lifted and Kashmiri stakeholders are made part of the negotiations. If bilateralism has been perpetually a failure in resolving this long-standing dispute, then what else will rescue the South Asian region from the shadows of war, but the intervention of the world powers, the U.N. and other global conduits?

He viewed that the international community spearheaded by the U.N. has been playing a constructive role in dispute resolution and helping the beleaguered nations including Bosnia, East Timor and South Sudan.

“People of Kashmir are also looking up to international support for their just cause. Let the distractors of the United Nations be shamed, who blame the United Nations of being selective in its approach,” he said. The question arises: For how long can the world allow such recurring threats to regional and global peace? How long will the Kashmir dispute simmer as the nuclear flash point between India and Pakistan? What is the likely cost of this apathy and complacency, for not only two countries, the people of Kashmir, but for the world at large?