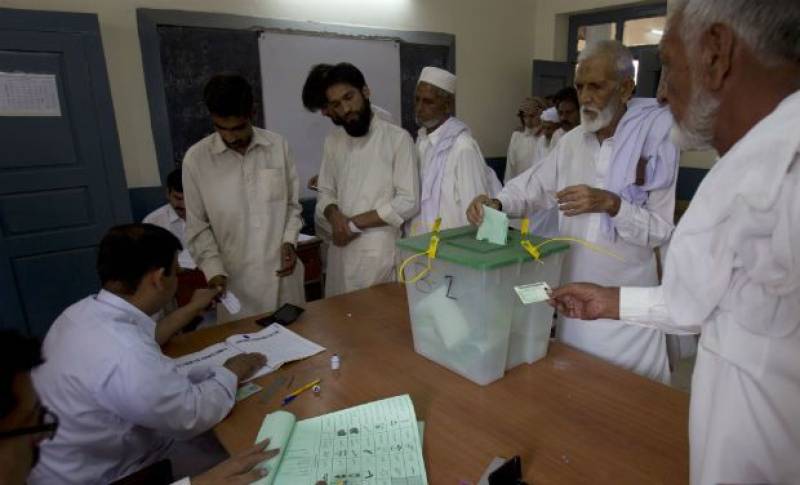 JHELUM (Staff Report) - The Election Commission of Pakistan (ECP) has completed all arrangements to hold polling for NA-63 Jhelum-II and PP-232 Vehari-I by-elections on Wednesday.

The polling process will begin at 8:00am and will continue till 5:00pm without any formal break.

According to the ECP, there are total four candidates, including an independent contestant in the run for NA-63, where the Pakistan Muslim League-Nawaz (PML-N) has fielded Raja Matloob Mehdi.

Meanwhile, Chaudhry Fawad Hussain is contesting the by-election on the ticket of the Pakistan Tehreek-e-Insaf (PTI) and Jahangir Mehmood Baig on Pakistan People's Party (PPP) ticket.

There are total eleven contestants for PP-232 by-election, however, the main candidates are Chaudhry Muhammad Yousaf Kaseliya of the PML-N and Ayesha Nazir Jatt of the PTI.

The provincial assembly constituency has over 191,000 registered voters, while there are 109,181 male and 81,911 female voters among them. A total of 157 polling stations will be established for polling process.

The Election Commission of Pakistan (ECP) has made extraordinary security arrangements for free and fair polling in the both constituencies. The district administrations have formed special teams of police to ensure law and order, while the contingents of Pakistan Army will also be deployed outside the polling booths to establish transparency.

The  NA-63 Jhelum-II seat fell vacant due to the death of Pakistan Muslim League-Nawaz MNA Iqbal Mehdi. The ruling party has now nominated his son for the by-election.

The ECP announced by-election at PP-232 Vehari-I constituency after  PML-N MPA Chaudhry Muhammad Yousaf Kaseliya of the PML-N was de-seated by the Supreme Court for hiding his assets.

Kaseliya had won the seat in the 2013 General Elections as an independent candidate, however, he formally joined Pakistan Muslim League-Nawaz later on.