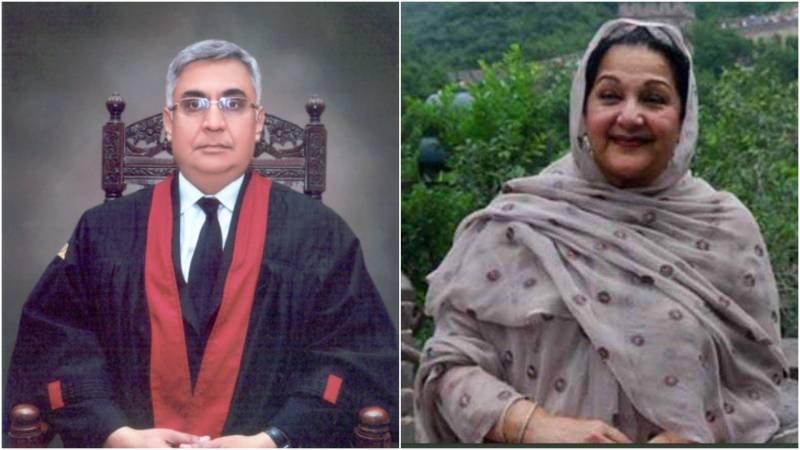 A plea requested the Lahore High Court to disqualify and prohibit Kulsoom Nawaz from contesting NA-120 by-elections was moved by PPP's nominee for the constituency on Tuesday.

The hearing for disqualification plea was fixed for today (Wednesday) however, Justice Farrukh Irfan excused himself from being a part of the bench constituted in this regard and requested the care-taker Chief Justice Lahore High Court Justice Shahid Hameed Dar to form a new bench.

In his petition, Faisal Mir contended that Kulsoom Nawaz concealed her assets and so she should not be allowed to contest elections. He filed the petition in Lahore High Court after the election tribunal rejected the objections raised by him against the PML-N contestant and approvedher nomination papers.

Although the senior judge of Lahore High Court cited personal reasons for not being able to proceed on the plea seeking disqualification of Kulsoom Nawaz but another aspect to the refusal is the fact that the said judge was also named in Panama Papers, a collection of documents that led to the disqualification of Nawaz Sharif as premier.

His appointment date as Anrol’s director is November 25, 2002, after which he resigned on October 11, 2011, the record shows. He was sworn in as high court judge on February 20, 2010, as declared on the LHC website, indicating that he had been running the company after becoming a judge.

On the other hand, Yawar Irfan Khan, former president of Lahore Chamber of Commerce and Industry (LCCI) and brother of Justice Farrukh Irfan Khan, had issued a statement declaring he has resigned before induction in the judiciary.

“On being notified as a Judge of the Lahore High Court, Farrukh Irfan Khan, who was abroad at that time, came back to Pakistan, and before his oath as a judge divested himself and resigned from business interests, directorship/shareholding etc. held by him aboard as well as in Pakistan,” Yawar’s written statement said.

However, the documents signed by the honorable judge indicate he had resigned from Tramalin in July 2012 and Anrol in October 2011, well after becoming a judge in February 2010.

There were more than 400 Pakistanis named in Panama Papers including politicians, businessmen, and the above-mentioned high court judge but apparently former premier Nawaz Sharif was made the centre of investigations n this regard and was ultimately disqualified from office on July 28 for concealing his employment with Capital FZE, a firm owned by his younger son Hassan.