Do we need military satellite? Take a look into where Pakistan stands in space 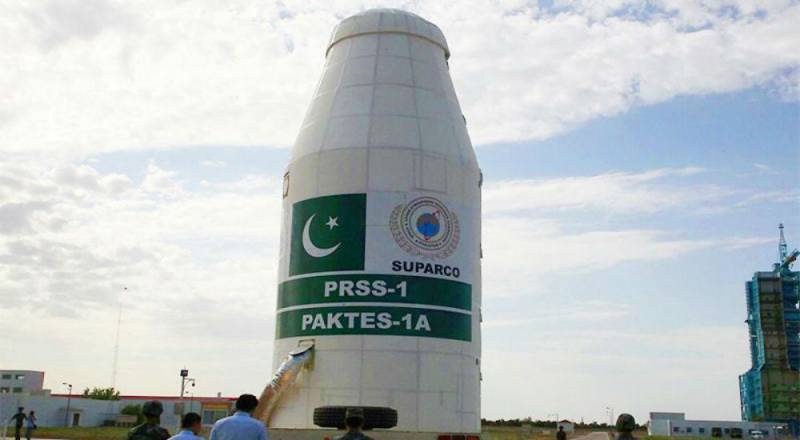 Space is a domain of future conflict, as new warfare seems to be in space rather than on earth; the reason that along with the USA many other countries are catching up in space race e.g. China and off-course Russia. Both of these countries are pursuing expensive space mission programs is an open secret. Even our neighboring country India, as compared to Pakistan, is growing much faster in various space mission programs.

It was Zia-ul-Haq regime when Space and Upper Research Commission of Pakistan (SUPARCO) suffered cut in funding to them. While on the other hand, with the expansion in the economy, R & D funds for scientific programs in India have grown with the passage of time. Till the date,  Pakistan has been able to launch in total 6 satellite namely BADR-1, BADR-B, PakSAT-1R, iCube-1 and two recently launched satellites called PRSS-1 and PakTES-1A,  as compared to 104 satellite by  India, besides their unmanned mission to mars and moon.

Achievements, like AVATAR space-plane, IRNSS as a low-cost program and interstellar mission made them 50 years ahead of us. In addition, Lockheed Martin and Swedish SAAB are interested in shifting their production lines to India, which is not the case if we take Pakistan.

On the other hand, when Pakistan was planning to launch its indigenous satellite into orbit, India planned to visit Venus, revisit mars and planned to launch multiple military satellites into space.

But what should really alarm Pakistan is that India has already 13 military satellites in space orbit for purpose of surveillance and secret war agendas as compared to none by us.  While keeping in view security situation and geostrategic position and our sour diplomatic relations with neighboring countries (along with USA), Pakistan is even more in need of military satellites than any other country in the region.

Now the question is; what is the current international scenario in terms of military space programs?  To answer this, I will quote Deborah Lee James, who is the last Air Force secretary “There is a real possibility that a conflict on Earth could bleed into space.”

In this context, it’s important to mention here that to have dominance in space Trump administration has currently suggested to have a separate military division called” space force” with a four-star general in command and the purpose of this separate division (if materialize) will be to solely use space for military purposes.

Space war center will be established to tackle any threat to military missions. For example, military satellite (in fact all satellites) contains internet.  And there is always a potential threat of not only hacking secret data, but day to day activities like banking, mobile services etc can also be disturbed or held if hackers mess with satellite signals and jam the satellite (and it is widely known fact that India has always remained on the top of hackers list). But just to stay on the topic, military satellites besides navigation, are used to track enemy jets and planes, can take pictures of intelligence services, and most important can control potential threat of missile attack.

Now the question is; where does Pakistan stand in terms of space security? As already mentioned above, Pakistan has recently launched two remote sensing satellites from China's Jiuquan Satellite Centre on 9 July 2018. One is indigenously built, while other, PRSS-1 which is optical remote sensing satellite is purchased from China. Though its current function will be landscape survey and management, agriculture and disaster management, it will also be used to monitor the route and development of Corridor Project (CPEC). This satellite will give remote sensing information of CPEC project. Satellite service would help secure those CPEC areas which can be vulnerable to terrorist attacks and criminal activities etc.

However, in my view, this satellite can be equally beneficial to monitor tribal belt, where ground communication infrastructure is still insecure or inefficient or even to monitor Pak-Afghan border fencing on the Durand line and it’s quite sane to have less dependency on USA surveillance system when there is a clear possibility of their evacuation from Afghanistan in the coming year(s); current Moscow summit is an indication of that.

However, Pakistan has done some breakthrough in its space program, for example launching a locally build satellite before 2040 and is planning to send its astronaut into space in 2022.  But still, ground realities cannot be overlooked. For example, as compared to India Pakistan is less involved in space-related activities i.e. from grass root level- outreach programs to applied side of knowledge.

On the other side in India, not only Indian Space-Research Organisation (ISRO) but multiple NGOs/non-profits are working in space science and we don’t have any single non-profit or private company in the space business. We have only nonprofit in the social sector and it’s an open secret that these NGOs are backed by foreign agendas and many have remained involved in anti-state and anti-Islamic activities and were warned and even banned by the interior ministry when was headed by Chaudry Nisar.

So why not to pursue non-profit in positive activities at least in outreach activities i.e. targeting youth and educating them in space science (and off-course there is more need to pursue applied side of the space application program, as a need of an hour due to our security situation). I have noticed that our youth is interested but motivation is lacking from professional institutes and organizations side.

For example, during May, I happened to attend an event at IST Islamabad called “Actinspace”. It is an International innovation contest, Organized by the French Space Agency (CNES), ESA and ESA sud France (who started operation in 2013). Though the event was designed for students but was open for everyone including entrepreneur and private companies etc. The contest was to make use of patents, technologies and satellite data made available by these sponsors (mentioned above) for commercial use, and the aim was to foster business start-ups. The challenges were based on high-level technologies but unfortunately, I barely saw any entrepreneurs or professional institutes or any private companies participating.

While on the other hand, in advance countries students and professionals work side by side and that is the reason their R & D sector is strong and higher education is more research and innovation oriented. In this contest, there were many topics offered that could be beneficial for military purpose (even on small scale) in the future.  For example topics like; orbital internet service for a satellite to strengthen space communication infrastructure capable of providing network access to the satellite in low earth orbit and which in return could enhance efficiency in data transfer, communication, satellite guidance and locating devices etc.

Application on determining one’s position accurately and reliably on earth, which can be used in the field of transport, scientific expeditions, military campaign through improving accuracy and reliability of current global navigation systems. It maps out the areas covered and the dead zone, i.e. those not covered by the main fixed SBASs (Satellite-based augmentation Systems) and in case of the military this technology can be used as a kind of mobile SBAS system, enabling troops to find their positions reliably anywhere in the world and to conduct military operations in isolated regions, etc.

In addition an innovative application on infrared camera that is star detection system can operate during both day and night, at high and low altitudes. The system can be used to monitor the attitude of both aeronautical and space vehicles, especially in cases where the alternative system such as GNSS, work poorly or not at all (e.g. for missiles, stratospheric balloons, etc). Topic on sensor for optical or other type of space surveillance to check satellite’s physical integrity, identify the position of damaged satellite or determining the type of space debris etc. Along with these topics, many others were offered for multiple civil-military uses.

Here, I would like to mention that in the context of Pakistan, space science needs volunteerism and unfortunately that is less practiced if I compare province of KPK with others and the reason is they are unaware of its importance and focus remains always on more conventional fields by the government.

However, I have seen spirit and enthusiasm in youth towards space science, but unfortunately professionals and teaching and management staff at educational institutes barely get indulge din any volunteer activity if they are not paid directly.

This is the reason this year World Space Week (WSW), which is an international space event and celebrated and conducted around the world, in the month of October, was not conducted in KPK while in other cities, it was celebrated with zeal.

UET Peshawar, which is being funded by SUPARCO from last many years to conduct this activity in KP educational institutes, showed least interest while youth were prepared with enthusiasm to participate in WSW.

In a nut hell, this kind of attitude should be discouraged so that our youth could be fruitfully indulged in activities that are in the greater interest of our nation as a whole.