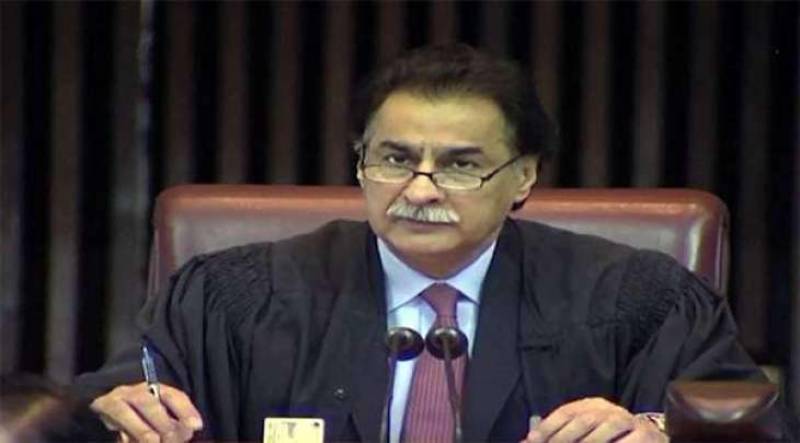 Giving his last speech in the assembly, he said this parliament has passed 57 new laws, six finance acts, five constitution amendments, three amendments (repeal) and 82 amendments were made in existing laws. He said for the first time seven acts were passed in joint sitting whereas thirty private bills became laws during the tenure of this assembly.

He thanked the opposition leader Syed Khurshid Shah, parliamentary leaders of political parties, women lawmakers, opposition and treasury benches for their cooperation in running the business of the house.

He also thanked the staff of the National Assembly for their contribution for smooth sailing in affairs of the House.

The speaker announced shields among for parliamentary leaders and appreciation certificates for all members of the House.

ISLAMABAD - For the first time in Pakistan's history, a second consecutive democratic government and elected National ...

He also appreciated media persons for giving comprehensive coverage to proceedings of the parliament and highlighting the positive image of the House. Rising on points of order, members lauded the speaker for running the business of the house in an amicable manner.

Minister for Parliamentary Affairs Shaikh Aftab has said the parliament is going to complete its five years term with the cooperation of all the lawmakers for their commitment to strengthening democracy in the country. He said the government enjoyed opposition support in getting several bills passed from the House.

Shireen Mazari said PTI has played opposition role very effectively. She said we have learnt a good experience during our tenure in the House.

The bill was moved by Minister for Parliamentary Affairs Shaikh Aftab.

It provides further to amend the President’s Salary, Allowance and Privileges Act, 1975.