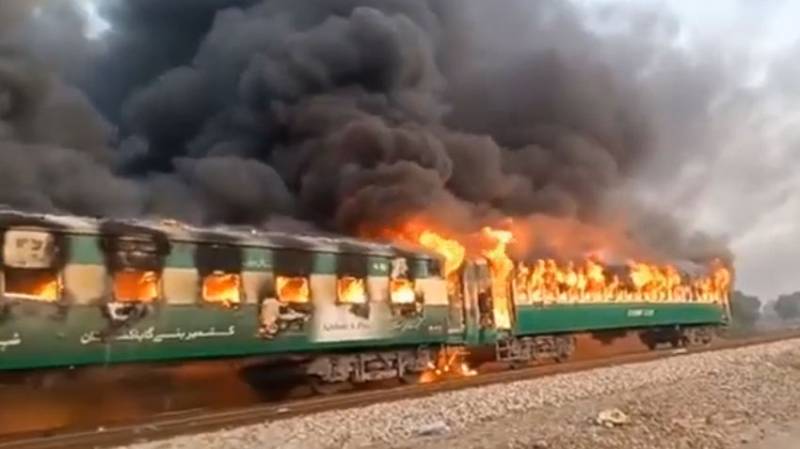 RAHIM YAR KHAN – At least 74 people, including women and children, have died while dozens others got critical burn injuries after a fire engulfed three bogies of Tezgam Express due to gas cylinder explosion at Liaquatpur in Rahim Yar Khan on early Thursday morning.

Railways Minister Sheikh Rasheed told the media in Multan that the accident took place near the city of Liaquatpur where several people died as they jumped outside the train due to the fire.

The train was reported en route from Karachi to Rawalpindi when the fire erupted, caused by an explosion of a gas cylinder that was being transported by one of the passengers.

Many of the dead and injured were shifted to DHQ Hospital in Liaqatpur.

According to Inter-Services Public Relations (ISPR) Director General (DG) Major General Asif Ghafoor, Pakistan Army soldiers have reached the accident spot and are assisting in relief and rescue efforts. An army helicopter was also dispatched from Multan in order to rescue the injured, the ISPR statement added further.

According to the Railways minister, the fire incident occurred when some of the passengers were cooking breakfast and suddenly gas cylinder exploded.

“Two cooking stoves blew up. They were cooking, they had (cooking) oil which added fuel to fire,” Rasheed told a private TV channel. “Most deaths occurred from people jumping off the train,” he added.

Three carriages (No. 3, 4, 5) had been destroyed by the fire, including two economy class carriages and one business class carriage. As many as 207 passengers were travelling in the three affected carriages.

The rescue officials have also recovered two gas cylinders from the affected carriages, which are believed to be the cause of the mishap.

The Prime Minister condoled with the bereaved families. He directed the authorities concerned to provide prompt and best possible medical treatment to those injured in the incident.

The affected carriages are being separated from the train while firefighters are busy in extinguishing the fire.

Emergency has been declared in all hospitals of the district as the injured are being shifted to nearby hospitals.

Head of the district rescue service Baqir Husain feared that the death toll could rise.