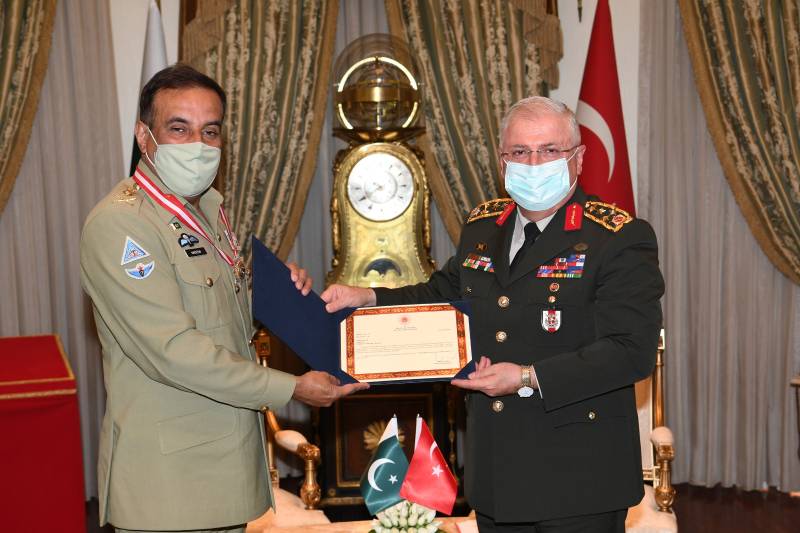 Chief of Turkish General Staff General Yasar Guler presented the award in recognition of his outstanding services for promotion of Pakistan-Turkey defence ties.

Gen Nadeem Raza is visiting Turkey from 27 March to 2 April 2021 at the invitation of the Chief of Turkish General Staff.

“Both the commanders held extensive talks. Matters of bilateral interest with an emphasis on geo-strategic situation and security challenges came under discussion. Both sides reaffirmed the resolve to further enhance cooperation between the armed forces of the two brotherly countries,” said a statement issued by the Pakistan embassy in Turkey.

General Nadeem Raza also visited APS Martyrs Park in Keçiören, Ankara. Together with Mayor Turgut Altinok, he laid floral wreath at the Martyrs Monument. To commemorate the martyrs of Army Public School Peshawar terrorist attack of 16 December 2014, APS Memorial Park was established by the people of Keçiören, Ankara. As a token of remembrance, 144 trees were planted, one for each Shaheed.

In order to pay respects to the founder of modern Turkey, Gen. Nadeem Raza also visited the Mausoleum of Mustafa Kemal Ataturk and laid floral wreath on Ataturk’s tomb.