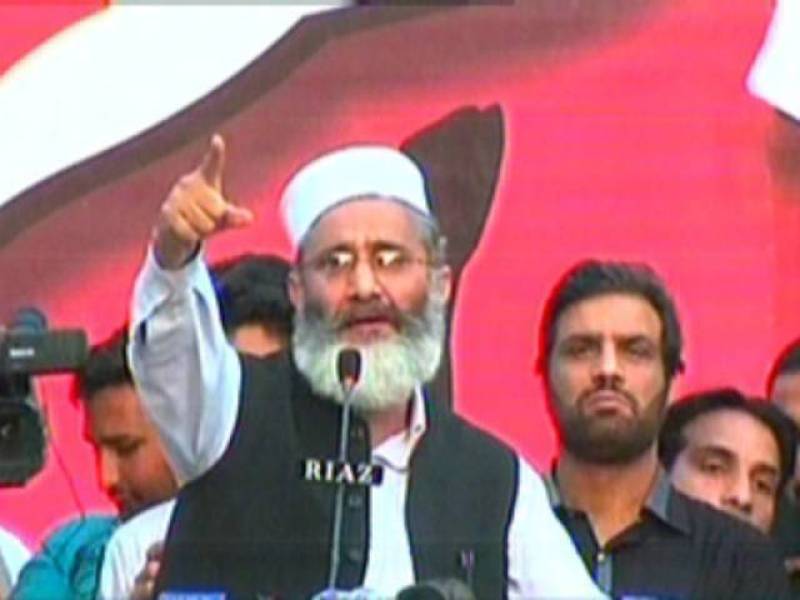 LAHORE - Jamaat-e-Islami (JI) chief Sirajul Haq has warned the country's rulers against welcoming Indian Home Minister Rajnath Singh, who is due to visit the country this week, adding that they would be forced to leave Pakistan. He has also appealed for a joint session of Parliament to devise a national strategy over Kashmir issue.

He said this during the Azadi-e-Kashmir march organised by his party, which crossed Lahore's Nasir Bagh and made its way towards the Wagah border crossing today. The rally was attended by a large number of people including Hizbul Mujahideen leader Syed Salahuddin.

During the rally, Haq asked the country's rulers to support the Kashmir cause on the international level and establish a fund to support injured Kashmiris. He urged the government to appoint a deputy foreign minister dedicated only to handling Kashmir's affairs.

He said the struggle for Kashmir was obligatory on every Pakistani, adding that the Pakistan project would not be complete until the disputed territory became a part of the country.

Addressing the rally's participants, Hizbul Mujahideen leader Syed Salahuddin said that the murder one Kashmiri, Burhan Wani, had fueled hatred for India among Pakistanis. He has also asked the Pakistani government to boycott all relations with India until resolution of the Kashmir dispute.

Qari Yaqoob Sheikh of Jamaatud Dawa went on to call India the second biggest terrorist country after America. According to him 300, Kashmiris had lost their eyesight due to the use of pellet guns by the Indian army, adding that 3000 innocent civilians had been injured till now.