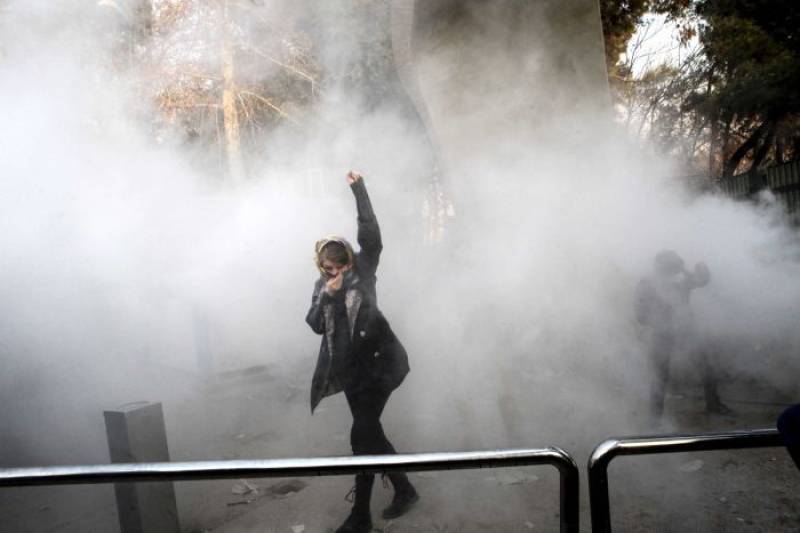 TEHRAN - At least 10 people have been killed in the ongoing street protests across Iran , state broadcaster said on Monday without giving details.

“In the events of last night, unfortunately a total of about 10 people were killed in several cities,” it said, while showing footage of damage from anti-government demonstrations.

The unrest erupted in the second largest city, Mashhad, against price rises but it swiftly spread and turned into political rallies. Hundreds of people have been arrested.

Videos showed people in central Tehran chanting: "Down with the dictator!" in an apparent reference to Khamenei.

Security forces attacked protesters in south and North west of the country.People protecting themselves and in some cities people are trying to take over IRGC bases.

Listen to this brave woman who says due to the rampant poverty in the country, she cannot even properly feed her kids. She is directly addressing the Supreme Leader of IRI#iranProtests pic.twitter.com/2wmc8cSzAK

Protesters in Khorramabad in western Iran shouted: "Khamenei, shame on you, leave the country alone!"

"Some armed protesters tried to take over some police stations and military bases but faced serious resistance from security forces," state TV reported.

"I do not know whether yesterday's shooting was done by rally participants or the police and this issue is being investigated," local parliament member Hedayatollah Khademi said.

He said the cause of death wasn't immediately known. Many in Izeh, some 455 kilometers (280 miles) southwest of Tehran , have hunting rifles in their homes.

On Sunday, Iran blocked access to Instagram and the popular messaging app Telegram used by activists to organise.

There were also reports that mobile access to the internet was being blocked in some areas.

Iran is a major OPEC oil producer and regional power but frustrations have grown at home with the country deeply involved in Syria and Iraq as part of a battle for influence with rival Saudi Arabia.

President Hassan Rouhani acknowledged the public's anger over the Islamic Republic's flagging economy, though he and others warned that the government wouldn't hesitate to crack down on those it considers lawbreakers.

In remarks carried on state TV, he said demonstrations should not make the public "feel concerned about their lives and security".

"The government will show no tolerance for those who damage public properties, violate public order and create unrest in the society," Mr Rouhani said.

Iran 's leaders believe they can count on support from many of the generation that took part in the 1979 revolution because of their ideological commitment and the economic gains they have made under the government, analysts say.

The demonstrations are seen as one of the biggest challenges to both the government and the clerical leadership since the 1979 revolution.

US President Donald Trump continued to tweet his support for the protesters, saying 'Time for Change'.

Iran , the Number One State of Sponsored Terror with numerous violations of Human Rights occurring on an hourly basis, has now closed down the Internet so that peaceful demonstrators cannot communicate. Not good!

Iran is failing at every level despite the terrible deal made with them by the Obama Administration. The great Iranian people have been repressed for many years. They are hungry for food & for freedom. Along with human rights, the wealth of Iran is being looted. TIME FOR CHANGE!

Rouhani said earlier Trump had no right to sympathise with Iranians since he "called the Iranian nation terrorists a few months ago".

Israel 's intelligence minister on Monday voiced encouragement for the protests but said Israeli policy was not to get involved in Tehran 's internal affairs.