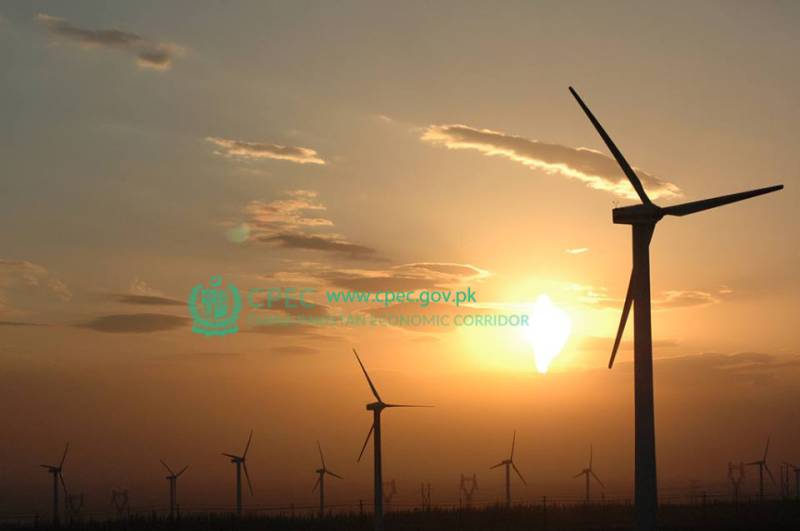 Dawood wind power project is a prioritized or early harvest project under CPEC, which installs 33 wind turbine generators with the capacity of 1.5MW per unit and total capacity is 49.5MW on 1,720 acres of land in the coastal area of Gharo wind corridor in Bhanbore, District Thatta, Sindh.

This is a direct investment (FDI) project and total investment of Dawood wind power project is US$115 million. The rate of equity to loan is 30 percent:70 percent. Dawood wind power project achieved Commercial Operation Date (COD) on April 4, 2017 and annual electric power supply to the National Grid is more than 130GWh, which is sufficient for daily use of 100,000 Pakistan families and is effectively easing the crisis of electricity shortage in Pakistan.

Sachal wind power project was completed in April 2017 at a cost of $110 million. It is located in Jhimpir, Thatta district, Sindh province, about 100km northeast of Karachi.

The Industrial and Commercial Bank of China (ICBC) provided a loan. The debt and equity ratio is 85 percent:15 percent.

The total investment amount is $224 million on the basis of Build-Own-Operate (BOO), with a construction period of 18 months and an operation period of 20 years. The total installation capacity is100MW, with an annual electricity output of 286.6 GWH. It was listed as actively promoted project in the China-Pakistan Economic Corridor in August, 2014.

Pakistan Jhimpir UEP 100MW wind farm is located in Jhimpir, Thatta district, Sindh, 110km from Karachi. The total installed capacity is 100MW with the supply of 66 sets of Wind Turbine Generators (WTGs) of 1.5MW per set. It also includes construction of a 132KV substation and a control center.

The commercial contract of this project was signed on September 11, 2015. China Development Bank provided financing of $252 million to the project, with the debt and equity ratio of 75 percent: 25 percent. The project became operation in May 2017.