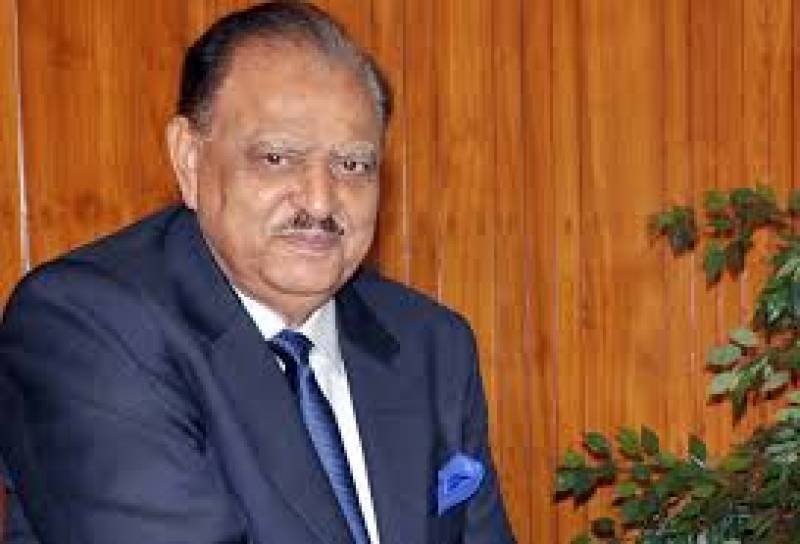 ISLAMABAD - President Mamnoon Hussain addressed the joint session of the parliament today (Thursday) despite opposition parties have walked out after disrupting the speech.

The president delivered a speech on the beginning of the fifth and last parliamentary year of ruling party Pakistan Muslim League-Nawaz (PML-N).

Prime Minister Nawaz Sharif and other PML-N leaders were present in the session. Heads of all three armed forces, ambassadors of different countries were also present on the occasion.

The opposition parties which are enraged over not giving permission to air speech of opposition leader Kharshid Shah and others regarding budget on PTV, chanted "Go Nawaz Go" in the parliament, besides holding placards. Later, they staged walkout from the parliament during the President's speech.

President Hussain extended congratulations to the nation on the continuation of the political process, adding that the process should not be interrupted for individual and parochial interest in order to make the country prosper.

Addressing the session, the President condemned the Indian aggression along the line of control, adding that Pakistan believed in proliferation of atomic arsenal.

Highlighting the CPEC, he said that the project will link the entire region and bring prosperity due to the state-friendly policies.

Talking about Fata and Gilgit-Baltistan, he said that the government has allocated huge funds to bring these areas into mainstream.

He also Afghanistan to settle the issues through dialogue, adding that peace cannot be ensured in the region without establishing peace in Afghanistan.

According to Radio Pakistan, the President proposed the government, the opposition and all the political parties should adopt Vision-2025 as a national plan through consensus to continue the welfare of public without hampering.

He also highlighted that there was also need to check the rising rate of population growth to ensure the optimal use of resources.

As the issues regarding airing speech of opposition leader Khurshid Shah on state-run TV still unresolved, the opposition parties on Wednesday gathered outside Parliament House and opened up a parallel budget session.

Lamenting of the attitude of ruling party, Shah said they had started an “awami assembly” to put light the issues being faced by the common people.

He criticised the PML-N for missing set target of the GDP growth and artificially decreasing the budget deficit.

He highlighted the ongoing projects in all province except Punjab which were not allocated funds by the government.