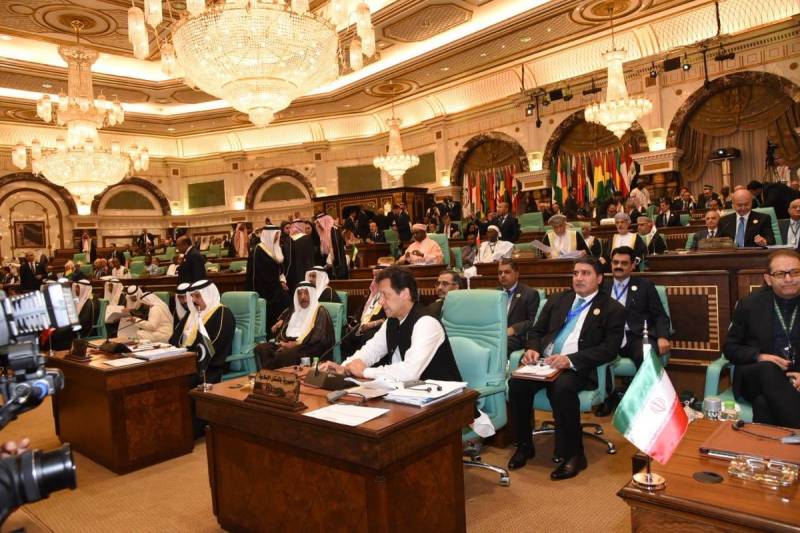 MAKKAH - Prime Minister Imran Khan Saturday while terming the phenomena of blasphemy and Islamophobia the OIC's failure, urged the Muslim world body to play an effective role in safeguarding the rights of Muslims and their religious sentiments.

Addressing the 14th Islamic Summit of the Organization of Islamic Cooperation (OIC) held in Makkah, the prime minister said the blasphemous acts against the Holy Prophet Muhammad (Peace Be Upon Him) in the western world was the failure of the OIC for not being able to explain to them the love and affection the Muslims had for the Holy Prophet.

The Custodian of the Two Holy Mosques King Salman bin Abdulaziz Al Saud chaired the session themed “Hand in Hand toward the Future”, which brought together the leaders of OIC member states to evolve a unified stance on the ongoing issues and events in the Muslim world.

On their arrival at the venue, King Salman received the guests, including Prime Minister Imran Khan who was attired in white shalwar kameez with a black waistcoat.

The prime minister said, “How He (the Holy Prophet) lives in our heart. It was up to us to explain to the western people the amount of pain they cause us when they ridicule or mock our Holy Prophet.”

He said in the west the people did not treat religion like the Muslims treated Islam. They had a totally different attitude to the religion, he added.

“I would like to say from this platform that in the forums like the United Nations and the forums like the European Union, we must explain to them that they cannot hurt the sentiments of 1.3 billion people under the garb of freedom of expression,” the prime minister urged the Islamic world.

He said the western world dealt with the issue of Holocaust sensitively as the Jewish community had successfully explained to them that any misinterpretation of the Holocaust gave them pain. But that sensitivity lacked when they talked about the Holy Quran and the Holy Prophet (PBUH).

Moreover, he said, the western world had equated Islam with terrorism which had done a tremendous disservice to the Muslim community.

“Religion has nothing to do with terrorism. No religion allows the killing of innocent human beings… This has led to Islamophobia. The moment that is referred to define terrorism, the people in the west could not distinguish between a moderate Muslim and a radical Muslim.”

Suspicions, he said, had been raised against the whole Muslim world. The shooting of 50 Muslims in two New Zealand’s mosques happened because they could not understand that Islam had nothing to do with terrorism, he added.

The prime minister said before the 9/11, around 80 percent of the suicide attacks were carried out by the Tamil Tigers but no one had blamed Hinduism for that. The religion had nothing to do with that because it was a political struggle.

He said in the Second World War when the Japanese pilots blew themselves up on American ships, no one had blamed their religion for it.

Besides causing Islamophobia, he said the OIC's inability also led to delegitimizing the Muslim political freedom struggles which were termed 'Islamic radicalism'.

He reiterated that there was no solution to the Palestine issue except the two-state solution. East Jerusalem must become the capital for the Palestinian people and the Golan Heights must be returned as per the 1976 borders as agreed by the international community.

Similarly, he said the people of Kashmir had not been given their right to self-determination as had been guaranteed by the UN Security Council’s resolutions.

The prime minister thanked the Saudi leadership for the great hospitality and providing them with an opportunity to visit the Roza-e-Rasool (PBUH) in Madina Munawwara.

The summit, also addressed by the Saudi King, OIC Secretary-General Dr Yousef bin Ahmad Al-Othaimeen and other Muslim world leaders, coincides with the 50th anniversary of the establishment of the organization.

The people of Kashmir, he said, had been carrying out their political struggle for freedom but after the 9/11, it was also dubbed as 'Islamic radicalism and terrorism'.

Therefore, the Muslim world must use the OIC platform to delink terrorism with Islam, he stressed.

The prime minister said the Muslim world was not paying much attention to science and technology despite being on the verge of another industrial revolution with the artificial intelligence and blockchain new technologies coming in.

“We must not be left behind again… We as a Muslim world must spend more of our resources in strengthening ourselves in this field. We must pay more attention to quality education in universities,” he added.

Imran Khan said the OIC, which was also observing its 50 years of establishment, came into being when the Palestinian Muslims were deprived of their homes, and human and democratic rights.