'I was finding target before being shot down by PAF,' Abhinandan admits in fresh video 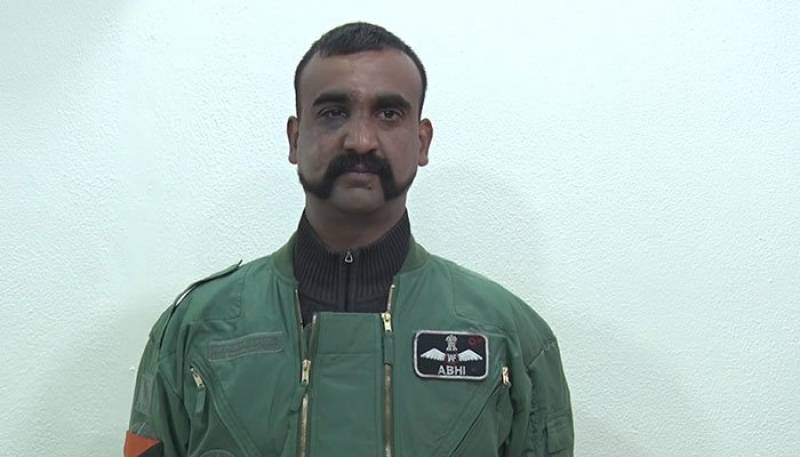 LAHORE - Indian pilot Abhinandan has admitted that he was locating a target in Pakistan when Pakistan Air Force aircraft shot down his fighter jet.

In a fresh video statement released Friday evening, the wing commander of Indian Air Force expressed that he had to eject himself out of the fighter jet which was targeted by the Pakistan Air Force.

Abhinandan who would be handed over to India shortly also lavished praise on Pakistan Army for its professional demeanour.

“Pakistan Army is very professional service. I see peace in it. I have spent time with the Pakistani Army, I am very impressed,” Abhinandan said in his message.

Wing Commander Abhinandan’s video message before his handing over to India pic.twitter.com/RZzOgEEJR1

Abhinandan also heaped scorn on Indian media for blowing events out of proportion.

"When I landed I was carrying a pistol and there were a lot of people around and I had only one way to save myself. I dropped my pistol and tried to run away. People followed me and they were charged," the captured pilot said.

Abhinandan continued that at this time two soldiers from the Pakistan Army pulled over and saved him following which he was taken to a hospital for additional medical aid.

His release was announced by Prime Minister Imran Khan at a joint session of Parliament on Thursday after Pakistan a day prior had shot down two Indian aircraft that had crossed the Line of Control (LoC) and captured Wing Commander Abhinandan, something that came as an unexpected setback for India.

However, PM Imran Khan also asked India not to escalate the situation. “Don’t take this any further, Pakistan will be forced to retaliate.”