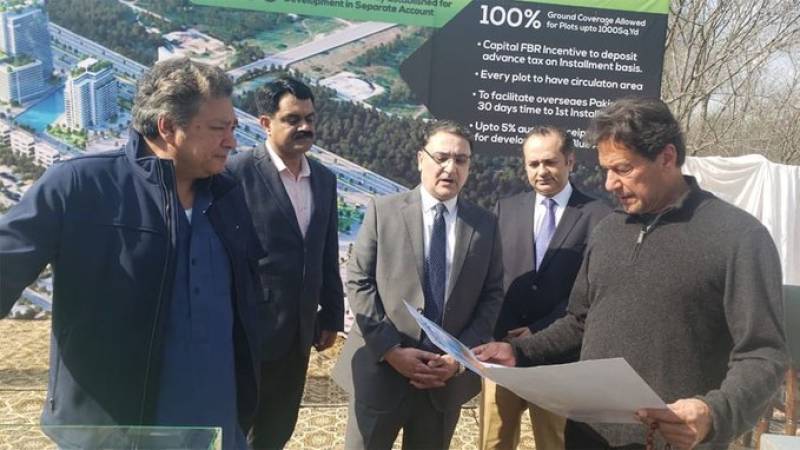 ISLAMABAD - Prime Minister Imran Khan Sunday launched the multi-billion rupee commercial project of Blue Area to auction the land and spend the revenue for the rehabilitation of Islamabad and construction of low-cost housing units.

“Launching the Islamabad Blue Area multi-billion rupees commercial project today. This will not only provide jobs but will also attract investment from overseas Pakistanis,” the prime minister tweeted while also sharing an image of being briefed about the project on-site by Chairman CDA and Chairman Naya Pakistan Housing and Development Authority (NAPHDA).

The open auction of the land, located opposite F-9 Park, has been scheduled from April 14 to 16.

The prime minister was apprised that the receipts from the commercial auction would be utilized primarily for the rehabilitation of Islamabad, provision of services and improvement of the environment.

A chunk of the revenue would also be utilized for construction of low-cost housing particularly for provision of respectable accommodation to residents of approved slums through NAPHDA.

This initiative coupled with several incentives to the construction sector including ease of deposit in advance tax on a pro-rata basis will encourage investment, result in job creation and speed up economic activity in the country. Particular instructions were given that trees should be preserved in this venture.

The prime minister said one each such mega project would also be launched in Lahore and Karachi soon.