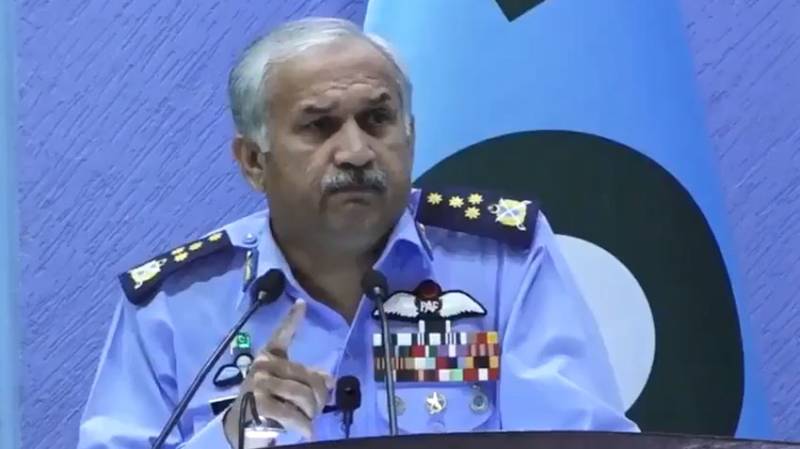 ISLAMABAD – Pakistan Air Force (PAF) has announced to remember in history its response on February 27 this year against the enemy aggression as “Operation Swift Retort”.

Addressing the 264th Air Staff Presentation meeting in Islamabad on Wednesday, Chief of the Air Staff Air Chief Marshal Mujahid Anwar Khan said PAF's swift response during the recent Indo-Pak conflict, was the demonstration of our firm resolve, capacity and capability in thwarting nefarious designs of the adversary.

“We bow our heads in complete humility and thank Almighty Allah for providing us an opportunity to come up to the expectations of our nation in giving a befitting reply to the enemy’s misadventure during the recent Indo-Pak conflict,” the air chief remarked.

“PAF’s swift response was the demonstration of our firm resolve, capacity and capability in thwarting the nefarious designs of the adversary,” he added.

Lauding the selfless commitment of PAF personnel, Mujahid Anwar said every rank and file of PAF deserved a special appreciation for proving equal to the task, adding, “I salute each one of you for showing strong commitment, perseverance and motivation being deployed at forward operating bases during these testing times.”

He reiterated his resolve that in case of any misadventure by the adversary, PAF response will be even stronger than before.

On Feb 27th, Pakistan Air Force shot down two Indian fighter jets over the disputed border region of Kashmir, in a significant escalation of the crisis between the two nuclear-armed powers.

The same day, India confirmed the loss of one plane (MiG-21 Bison) and said it shot down a Pakistani jet (F-16) as it responded to the incident. However, the Indian claim was later debunked by US officials who said that they have counted the number of Pakistan Air Force F-16s in service and can say that none were lost to the Indian Air Force on Feb 27 this year.

Pakistan also captured an Indian pilot, Wing Commander Abhinandan Varthaman, and to India's fury, published a video of him. He was later handed over to India authorities.

At the conclusion of the Wednesday’s event, the PAF chief awarded trophies to the bases excelling in various domains.

Trophies for best performance in ‘Training and Flight Safety’ were awarded to PAF Base Shahbaz, while the ‘Strongman Trophy’ was won by PAF Base Mushaf.

The Ground Safety trophy was awarded to PAF Base Peshawar. Air Staff Presentation is held quarterly at PAF to take stock of its operational preparedness.