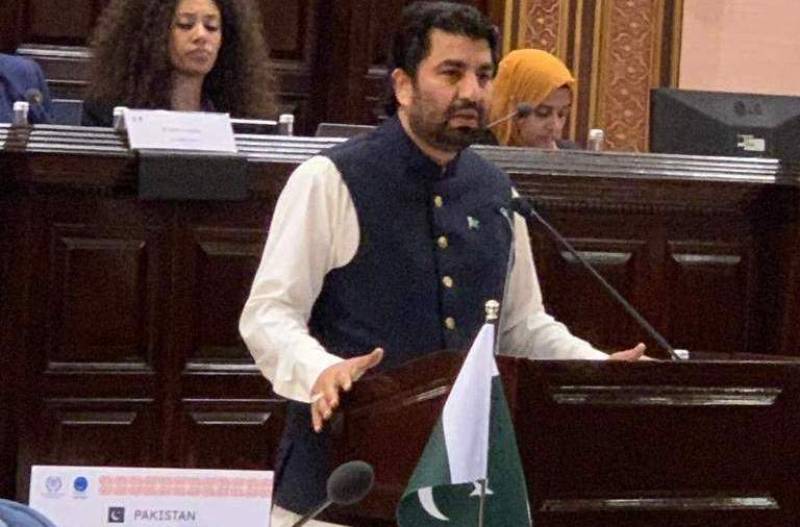 MALE - The Deputy Speaker of Pakistan's National Assembly, Qasim Khan Suri vehemently advocated the Kashmir cause, condemning the rights violations in the valley.

Addressing the 4th South Asian Speakers’ Summit in Maldives on Sunday, Suri highlighted the oppression being meted out to Kashmiris by the Narendra Modi-led BJP regime in front of the Indian Lok Sabha Speaker Om Birla and Harivansh Narayan Singh, Deputy Chairman of the Rajya Sabha.

As soon as Suri called for the resolution of Kashmir crisis as per the resolutions of the United Nations, the Indian officials started protesting, trying to disrupt the Pakistani representative.

"We cannot ignore the oppression of Kashmiris," said Qasim Suri.

The NA deputy speaker, in his 14-minute-long speech, expressed solidarity with Kashmiris in an effective manner amid protest by Indian delegation aimed at silencing the Pakistani representative.

Deputy Chairman of Rajya Sabha Harivansh Narayan Singh insinuated that the Kashmir issue was an internal matter of India, in flagrant contradiction with the UN resolutions and global calls being made now.

The Indian officials also tried to pin blame on Pakistan for terrorism, however, the Pakistani delegation gave a strong rejoinder and said the country was a victim of terrorism.

Harivansh Narayan Singh also objected to the Pakistani delegation for bringing up the Kashmir issues, saying the moot was only meant to discuss Sustainable Development Goals.

"I will not tolerate it," said the Pakistani official as soon as the Indian representative tried to pin blame on Pakistan for terrorism and implied that SDGs were linked to human rights as well.