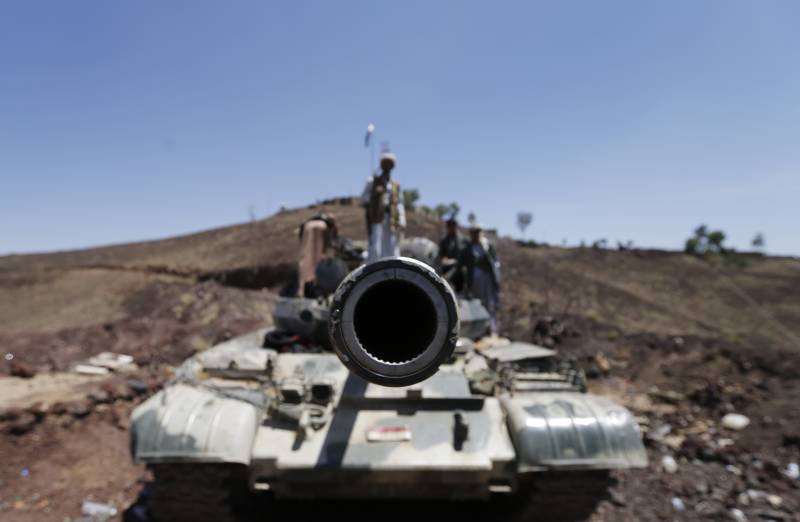 BAKU/SANAA (Web Desk) - The militants of Al-Qaeda network on Thursday attacked the provincial capital of Hadhramaut, Al Mukalla, in the south-east of Yemen. Report informs citing TASS, militants attacked the central prison of the city and freed hundreds of prisoners.

According to the local sources, there are some clashes in a few areas of the city, located at 480 km from Aden. In addition, clashes have covered the vicinity near the presidential palace, security department, building of the central bank and the port.

Whereas, Houthi fighters and allies backed by tanks have advanced onto a key district in the main southern city of Aden, despite a week of air strikes by Saudi-led coalition forces.

Aden residents said they saw groups of fighters carrying rocket propelled grenades and accompanied by four tanks and three armoured vehicles in the Khor Maksar district - part of a neck of land linking central Aden to the rest of the city.

Many people fled the area and some were trying to get on a ship leaving the port, as the death toll jumped to 122 over the past five days.

As the fighting continues, there has been increasing concern about the number of casualties. A spokeswoman for the aid agency Medecins Sans Frontieres (MSF) told the BBC that its hospital in Aden had received more than 500 injured people from all sides in the conflict over the last two weeks.

"The major injuries are gunshots and since the bombs we have some people with injuries linked to explosions," said spokeswoman Marie-Elisabeth Ingres.

A medic at the city's main Jumhouriya Hospital said that it has received the bodies of six dead civilians and five local militia fighters, known as "popular committees".

Meanwhile, a military official close to the Houthi rebels said that they lost eight men in the clashes, an international news agency reported.

The Houthis, with vital support from army units loyal to former president Ali Abdullah Saleh, emerged as the dominant force in Yemen after they took over the capital Sanaa six months ago and they now control much of the Arabian Peninsula country.

Yemen's Foreign Minister has expressed alarm at the Houthi advance.

"What's happening now would be a disaster for Aden and its people, if Aden falls," Riyadh Yassin told Al Jazeera.

The alliance of mainly Arab Gulf states had bombarded rebel positions in the port city in a seventh night of raids that also targeted the capital Sanaa and other areas.

The coalition has also attacked the Houthis from the sea but their advance towards the southern port city, the last major stronghold of Hadi supporters, has been relentless.

Hadi left the city on Thursday for Saudi Arabia, whose stated aim is to restore him to power.

"Operations in regions and roads leading to Aden were intensified and have been fruitful," he said at the daily briefing, without giving details.

An explosion at a dairy factory in Yemen's Hodaida port killed at least 25 workers, medical sources said, with conflicting accounts attributing the blast to an air strike or to a rocket landing from a nearby Houthi base.

The Houthi movement said that "after a week of bombing on Yemen the aggressors have not achieved any result ..."