A cup of tea or water, that's all being offered by Imran Khan to diplomats amid austerity promise 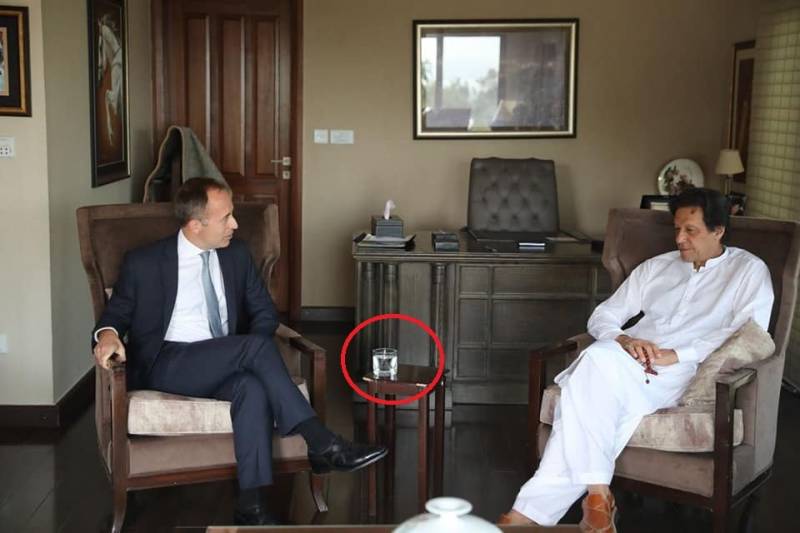 ISLAMABAD – Pakistan Tehreek-e-Insaf chief Imran Khan has started what it can be termed as rehearsal to cut government expenditures after assuming the power as he had pledged in his victory speech.

In General Elections 2018, the PTI emerged as the major national party as it bagged majority of National Assembly seats and is also set to form government in Punjab and Khyber Pakhtunkhwa.

Following the triumph, Imran Khan was felicitated by world leaders, hoping to build more strengthened bilateral ties. Diplomats of various countries to Pakistan visited the PTI chief at his Bani Gala residence to extend the best wishes for his future.

They envoys discussed matters related to future relations between Pakistan and their countries, but in the pictures it can be observed that only a cup of tea or glass of water is being offered.

Instead of offering lavish foods to the dignitaries, including the top ambassador of the United Kingdom, Khan served them with simplicity as his focus appeared to be on the ties with rest of the world and development in Pakistan.

British High Commissioner to Pakistan Thomas Drew met Khan at his Bani Gala residence, where the PTI chief could offer different cuisines on his own expenses. In the pictures shared by the PTI on Twitter, both dignitaries can be seen sitting on comfortable chairs with a wooden table between them. Just a glass of water is placed on the table.

The British High Commissioner to Pakistan called on PM Designate Imran Khan at Banigala, Congratulated him on his Party's Victory in General Elections 2018. #PrimeMinisterImranKhan pic.twitter.com/PSZwOef53g

The top envoy of the UAE, Hamid Obaid Ibrahim Saleem Alzaabi also called on the PTI chief to congratulate him on his victory in the polls. The visiting envoy was served with a cup of tea as can be seen in the pictures.

Saudi Ambassador to Pakistan Nawaf Bin Saeed Ahmad Al-Maliki also called on Khan, following his party’s thumping victory in the 2018 general elections. A bottle of water was offered to him.

It is yet to seen whether Imran Khan will follow the same tradition after becoming the prime minister of Pakistan. His victory speech, which on one side raised expectations among public, is also not less than a challenge for him as people are observing his every move closely.

A Pakistani expat has launched a 'Khan Meter' on his website to track the promises made by Khan during the election campaign and in the victory speech.

In the speech, he said: "I pledge this to you today, it will be my foremost aim to remain as simple as possible … in this poor country, these huge symbols, these mansions and protocols, on public’s money, I pledge that there will be a different kind of governance in Pakistan".