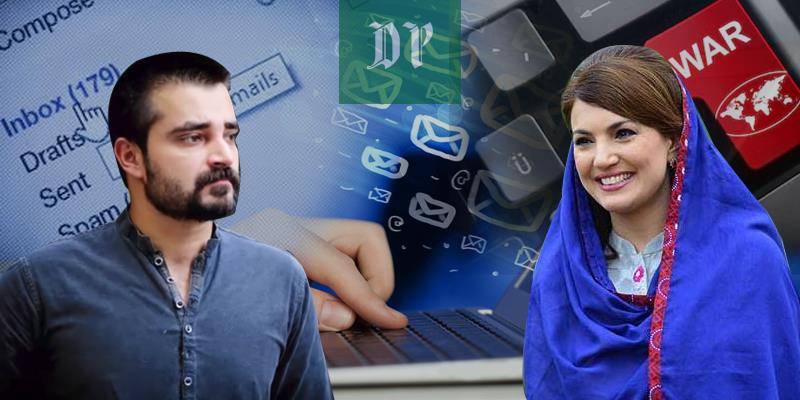 ISLAMABAD - Reham Khan's autobiography is making headlines even before its release as famed TV star Hamza Ali Abbasi has dragged himself into the controversy by commenting on the much-awaited piece.

Hamza, who is a staunch support of Pakistan Tehreek-e-Insaf fired a tweet on Friday, saying he had gone through the contents of Reham's upcoming book, censuring Imran's former wife for having penned a content, portraying her in favourable light.

However, the controversy has started heating up as Reham Khan published few of the e-mails on Saturday, she claims to have been forwarded by Hamza Ali Abbasi.

In the said e-mails, the 'Pyarey Afzal' star had claimed that a substantial amount of data belonging to G-mail's account of Reham was in possession of party leadership, which was not made public as Imran Khan had issued gag orders in this regard.

"Those are personal emails of sensitive nature and trust me they are real," Hamza wrote in the e-mail sent in August last year and asked Reham to stop maligning Imran Khan.

On the other hand, Reham had responded to the e-mail by saying that the emails would inflict a damage on 'your leader', in a reference to Imran Khan.

Thereafter, Hamza wished Reham All the best but hastened to wrote that 'TBH I think it's the opposite case here'. He had earlier requested the TV anchor to delete the emails.

Reham Khan's book is likely to be released next week in London; the political analysts and foes of PTI are anxiously waiting for the release as reportedly, Imran's former life has blown the lid off the personal life of the cricketer-turned-politician.

Meanwhile, PTI chief, Imran Khan, had earlier affirmed that the book would actually give a fillip to his election campaign, contrary to the perception.