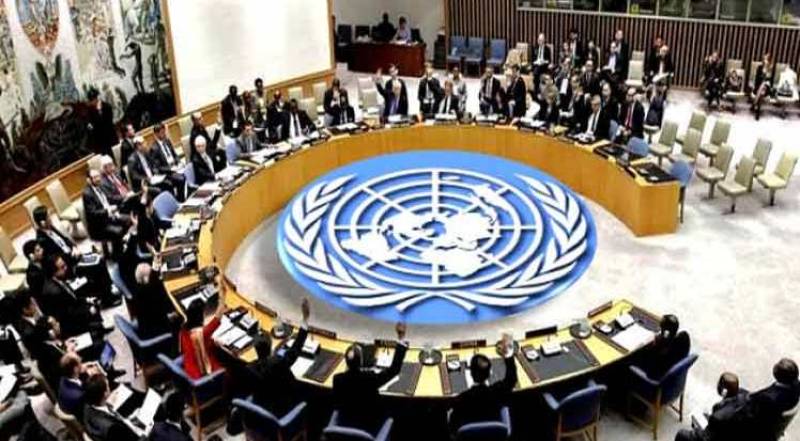 NEW YORK – The United States has vetoed a U.N. Security Council resolution seeking protections for Palestinian civilians in the Israeli-occupied territories and Gaza, while a competing US-sponsored draft that blamed the Hamas movement for the recent surge in violence was resoundingly defeated in the 15-member body.

The US was isolated in Friday's vote on its draft, casting the only vote in favour. Bolivia, Kuwait and Russia voted against it, while the 11 other council members abstained. Analysts at the UN do not recall a resolution ever securing only one vote in the Security Council.

The draft proposed by Kuwait for the protection of Palestinian Civilians garnered 10 votes in favour, but the US vetoed the text, which it said failed to even mention Hamas, and the group's responsibility for protecting civilians.

Four countries -- Ethiopia, Netherlands, Poland, United Kingdom -- abstained. If one of the Council's five permanent members “ China, France, Russia, the United Kingdom or the US“ casts a negative vote on a resolution, the text cannot be adopted.

The resolution came after Israeli forces killed at least 61 Palestinian people injured more than 2,700 along the Gaza border on May 14 when the US officially moved its embassy from Tel Aviv to Jerusalem.

This was the second time the Trump administration had used its veto to block a measure in the council it claims is anti-Israel.

The first was in December when the U.S. was isolated 14-1 in a vote calling for the withdrawal of the Trump administration's recognition of Jerusalem as Israel's capital.

The Kuwaiti draft also called for an "immediate, durable, and fully respected cease-fire" as well as asking U.N. Secretary-General Antonio Guterres to report on an "international protection mechanism" for Gaza.

Immediately following the US veto, Kuwaiti Ambassador Mansour Ayyad Al-Otaibi said that the US-vetoed resolution had been submitted on behalf of the Arab countries and has been supported by the Organization of Islamic Cooperation (OIC) at its recent summit in Istanbul.

"We deplore that the Council failed to adopt the resolution, which stipulates protection should be provided to the Palestinians, who he said, were in dire need and enduring a tragic situation in the face of massacres by Israel, the occupying Power," he said.

US Ambassador to the UN, Nikki Haley, described the resolution as "grossly one-sided", and pinned the blame on much of Palestinians' suffering on the Hamas movement, which runs the Gaza Strip.

In a statement later on Friday, Hanan Ashrawi, Palestinian Liberation Organization executive committee member, said the US had once again demonstrated its "blind loyalty to Israel and tried to absolve it of any wrongdoing despite its egregious violations, deliberate massacres and willful killings and war crimes.

"With its veto, the United States is once again attempting to justify the lawlessness and cruelty of Israel's military occupation, while providing Israel with legal and political cover to pursue its assault on the Palestinian people and on international law and international humanitarian law."