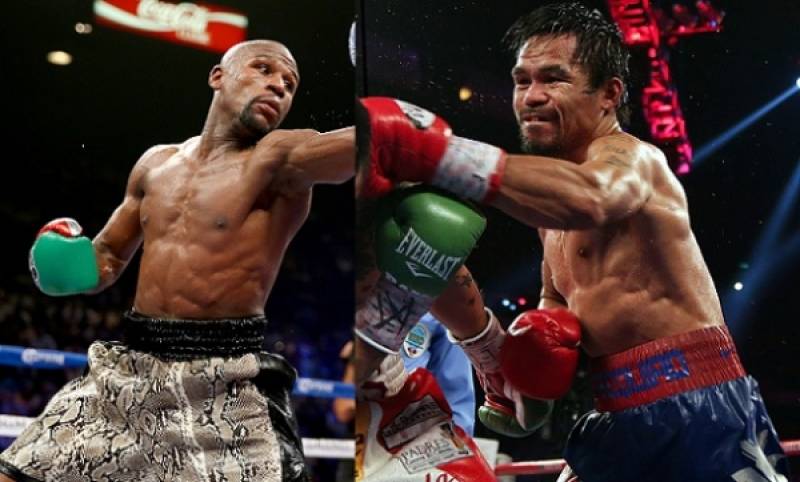 By the time the bell rings Saturday night at the MGM Grand Garden Arena, sportsbook chief Jay Rood expects the amount wagered on Mayweather-Pacquiao to be double that of any other fight.

The Westgate SuperBook took a "large" bet on Pacquiao Thursday night, forcing the book to adjust its price on the fight. Mayweather was down to a minus-190 favorite Friday morning, after being listed at minus-210 on Thursday. SuperBook director Jay Kornegay declined to get more specific about the size of the wager. Station Casinos' sportsbook trimmed its price on Mayweather to minus-185 Thursday night, as action on Pacquiao continued to appear.

Rood said three times more bets had been placed on Pacquiao than on Mayweather at the MGM, which is hosting the fight and will attract the largest share of what's expected to be a record betting handle. While there are significantly more bets on Pacquiao, the money is evenly distributed between the two fighters. Rood considered dropping the price on Mayweather below minus-200 Thursday after taking multiple big bets on Pacquiao.

"One was just over a hundred (thousand) and the other just shy of a hundred (thousand)," Rood told ESPN Chalk of the Pacquiao bets. "We've still had a couple people asking about betting big on Mayweather, though, but they haven't stepped to the plate yet."

William Hill said 64 percent of the money wagered at its sportsbooks is on Pacquiao. Sportsbook operator CG Technology and Caesars sportsbook also reported having slightly more money on Pacquiao.

Everyone was reporting enormous handle on the biggest fight in Las Vegas in decades. The most heavily bet fight at the MGM was Mayweather's bout with Saul "Canelo" Alvarez in 2013, followed by Pacquiao's 2009 match against Miguel Cotto. Rood said Mayweather-Pacquiao is on pace to generate twice the amount of money of either of those fights and expects "tens of millions" to be bet on Saturday's fight at his book.

Estimates range from $50 million to $80 million for how much will be wagered statewide in Nevada.

"This will be the biggest live gate, biggest pay-per-view buy and biggest fighter purses in boxing history, as well as the biggest Nevada fight wagering handle," said Station Casinos sportsbook chief Art Manteris, a 30-year-plus Vegas veteran. "Not even close."

A draw remains a popular pick for bettors. The odds of the fight ending in a draw have dropped from 22-1 to 6-1 at the MGM. The Stratosphere was down to 5-1 on a draw.

"We don't need a draw," Stratosphere supervisor Hugh Citron said. "We took decent pops at 12-1 and another at 10-1. Anything but a draw."