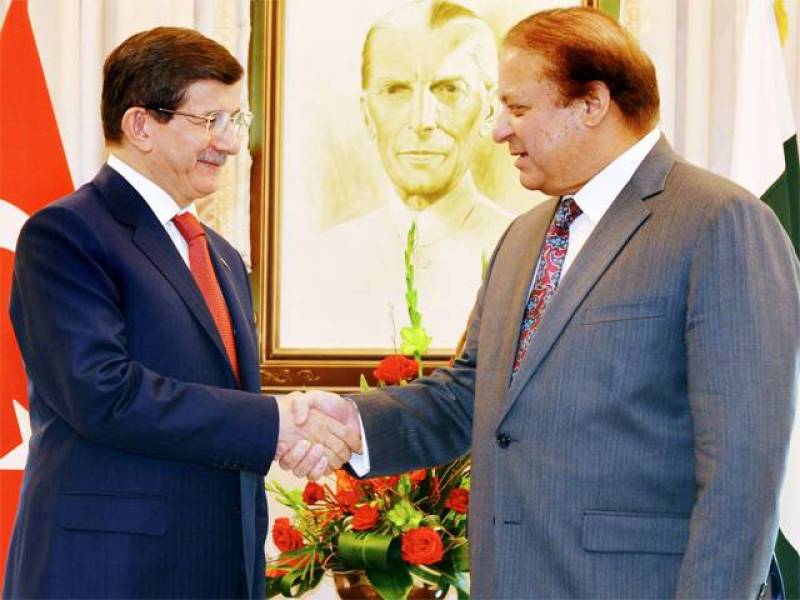 ANKARA (Staff Report) - Voicing serious concern over growing insecurity and instability in the Middle East, notably in Yemen,  Pakistan and Turkey on Friday called on other Muslim countries to intervene for a peaceful resolution to the conflict.

This call for the Islamic world came in a meeting between Pakistan Prime Minister Nawaz Sharif and his Turkish counterpart Ahmet Davutoglu.

Sharif, in a joint news conference after the meeting, said the two countries are concerned about the deteriorating situation in Yemen, since the Houthi rebels have challenged the legitimate government of President Hadi.

"This crisis is an issue of common concern as it affects the whole region. We wish the parties find a peaceful solution," he remarked.

Sharif went to say that both Pakistan and Turkey have strong ties with Saudi Arabia and would stand by the Kingdom in the hour of need.

Turkish Premier Davutoglu reaffirmed his country backs Pakistan's stance over the Yemen crisis. "We are in contact with Saudi Arabia and Iran for a solution the two sides could live with."

Davutoglu thanked his Pakistani counterpart for his visit to discuss the core issue of Middle East. "Pakistan's concern is Turkey's as we share the same feeling."

Prior to the media talk, the two sides had a round of talks revolving around the situation in Yemen after Prime Minister Nawaz Sharif landed in Ankara on a daylong visit.

Sharif will also take up the matter with Turkish President Recep Tayyip.

The prime minister is also expected to visit several other Muslim countries in the next few days to urge them to play meaningful role in peaceful resolution of the crisis.

Earlier a high level defence delegation of Pakistan had visited Saudi Arabia where they held talks with Prince Muhammad bin Salman al-Saud after the Kingdom asked the only declared Islamic nuclear state to join the fight against rebels in Yemen.

Saudi-led coalition forces started "Operation Decisive Storm" targeting Houthi fighters on the formal request of Yemen government on March 31. Since then intensive fight continues in cities of Sanaa, Aden and Al-muakla, and at least 114 are reported dead along with several hundred others injured.

One Saudi border guard was killed at an observation post on the border with Yemen when Houthis opened fire in mountainous area.

Yemeni Foreign Minister Riyadh Yaseen requested Saudi Arabia and the other coalition forces to send ground troops to Yemen as he believed the aerial strikes against Houthi rebels were not enough remedy.

Egypt and Saudi Arabia expressed their readiness to send in the ground troops to fight the rebellion and restore the writ of the ousted president al-Hadi, who is currently residing in Riyadh.

Since the conflict has started most of the western countries and United Nations have closed their diplomatic offices in Yemen.