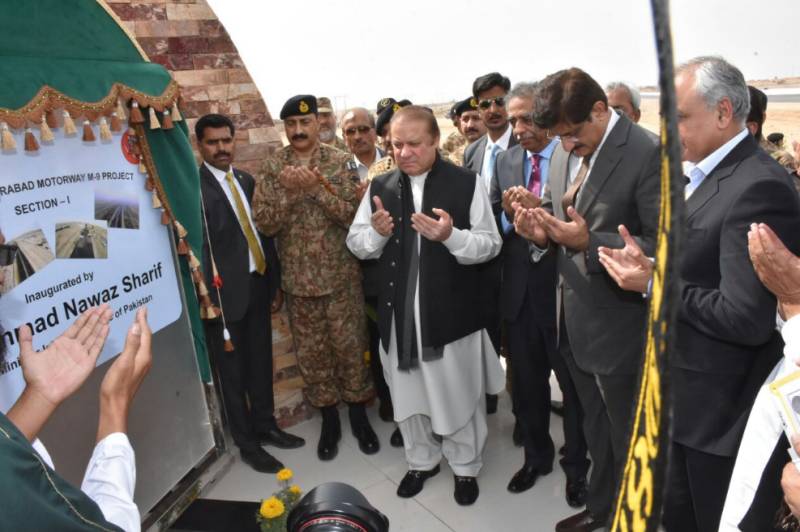 Addressing the inauguration ceremony, he expressed that the government had no time for sit-ins, taking a jibe in a veiled reference at his foes mainly Pakistan Tehreek-e-Insaf.

He claimed that the people were witnessing a naya Pakistan being built adding that all the promises would be fulfilled by the next year.

'Bridges, interchanges and service roads are being built. On the other side, work on the Multan-Sukkur motorway has been initiated. Building the nation is not a game,' he added.

The premier observed that building infrastructure was a key to modernisation and Pakistan could have seen the progress that was started in 1999 however it was stopped halfway through.

Nawaz Sharif outlined the progress of incumbent government regarding the elimination of load-shedding in the country.

"Electricity had abandoned us, as if it was unhappy with is. But we have started bringing it back to Pakistan. 1000 megawatts will be added to the grid this year," he reiterated.

The prime minister reaffirmed that the load-shedding would be eradicated by 2018 as solar and windmill projects were being erected by the government.

At one point, the law maker took potshot at his political rival Imran Khan without naming him and added: 'Those who fly around in helicopter could not acknowledge the importance of roads'.

The 136 km Karachi-Hyderabad Motorways project was commenced on September 17, 2015, which is expected to be completed by March 17, 2018 with a cost of Rs 36 billion. Construction on 120km has started including interchanges, 5 bridges, 197 km service road and plantation on 40 km.

At present, the government is spending Rs 1,200 billion on various roads infrastructure, which will change the economic outlook of the country.

The under construction motorways projects include Thakot-Havelian, Lahore-Abdul Hakeem (M-3), Sukkur-Multan Motorway (M-5), Gojra-Shorkot and Shorkot-Khaniwal. After the completion of these projects, the total length of motorways will reach 2000 km.

Under the directions of the Prime Minister, National Highways Authority (NHA) is proactively pursuing these projects of immense national importance.

Keeping the strategic location of Pakistan in consideration, the present government has started some revolutionary projects like China Pakistan Economic Corridor consisting of a long network of motorways and expressways from Khunjrab to Gwadar.