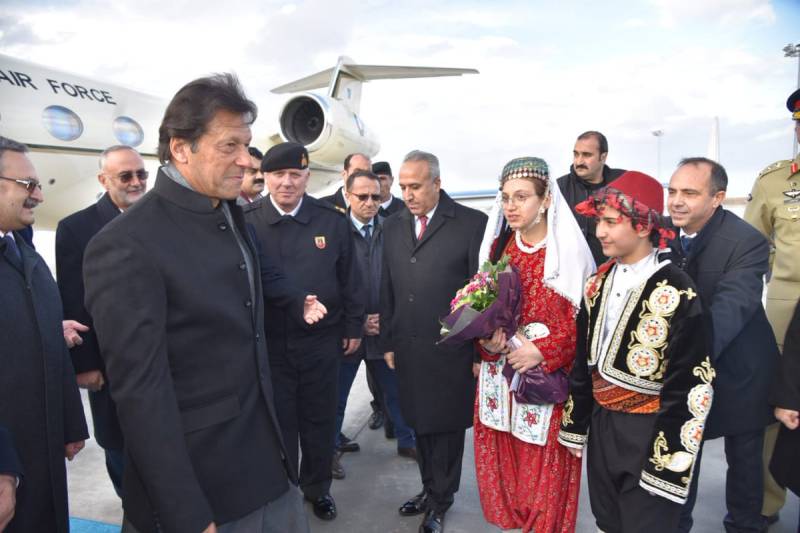 ISLAMABAD – Prime Minister Imran Khan has reached the Turkish city of Konya on a two-day visit to Turkey at the invitation of President Recep Tayyip Erdogan.

The prime minister would meet Turkish president and discuss various aspects of the bilateral ties, besides regional and international matters.

Along with his delegation, the prime minister paid respect at the tomb of the renowned Persian poet, jurist and Islamic scholar, Maulana Jalaluddin Rumi, also located in the very city.

During the visit, he is also scheduled to address a business forum in Ankara. The visit would further strengthen the bilateral ties particularly helping explore more avenues of bilateral cooperation in fields of trade and commerce.

After assuming office, this is the first official visit of the prime minister to Turkey.

“In addition to bilateral political, commercial and economic relations, we look forward to regional and global developments, especially the ongoing peace process in Afghanistan will be discussed during the meetings.” Yurdakul said.

“Satisfying level in political relations should be reflected in commercial and economic areas. Our relations are not only brotherly but mutually beneficial as well,” he said.

"Those agreements we sign for Attack and Tactical Reconnaissance (ATAK) helicopters and corvettes are only the beginning of defense industry cooperation between the two countries,” the ambassador added.

He said quality of education will be improved after Turkiye Maarif Foundation takes control of schools in Pakistan that were linked to Fetullah Terrorist Organization (FETO).

ISLAMABAD – The Supreme Court of Pakistan on Friday ordered the government to declare the Fetullah Terrorist ...

At the end of December, the Supreme Court of Pakistan had ordered the government to declare the FETO as a terror group and to ban its affiliated schools in the country.

The top court ordered the transfer of FETO’s "all movable and immovable assets," schools, colleges, education centers and other similar entities to the Turkiye Maarif Foundation.

FETO and its US-based leader Fetullah Gulen orchestrated the bloody failed coup of July 15, 2016 in Turkey, which left 251 people martyred and nearly 2,200 injured.

Ankara also accuses FETO of being behind a long-running campaign to overthrow the state through the infiltration of Turkish institutions, particularly the military, police, and judiciary.

In October, Pakistan Navy commissioned a 17,000-ton fleet tanker it has built in collaboration with a Turkish defense contractor, STM.

Pakistan is set to receive 30 T129 ATAK helicopters from Turkey under a deal finalized in July this year. The helicopters, specifically designed for attack and reconnaissance, will be delivered gradually over five years.

ISLAMABAD/ANKARA - Pakistan and Turkey have agreed on the sale of a batch of 30 Turkish-made T129 ATAK multirole combat ...

ISLAMABAD - Turkey and Pakistan have signed a memorandum of understanding on a mutual arms deal after which Turkey will ...

In July this year, Ankara won a multibillion-dollar tender to supply four corvettes to Pakistan Navy -- a deal dubbed as the biggest export for Turkey’s defense industry in history.