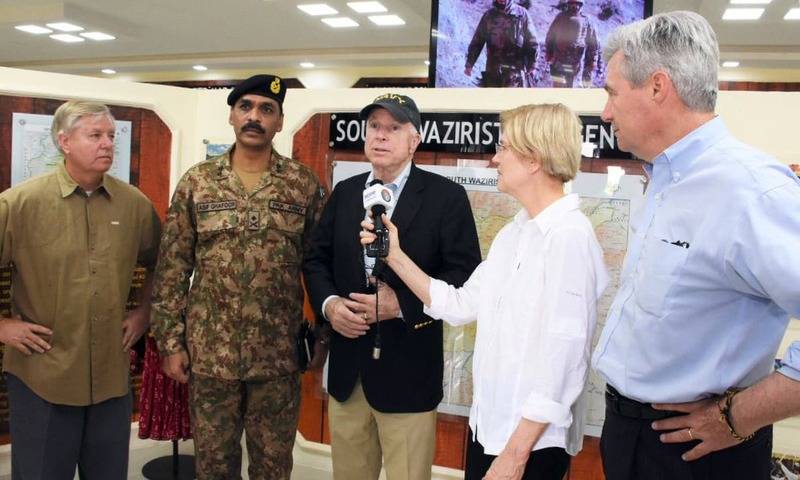 The five-member delegation, which includes Senators Lindsey Graham, Sheldon Whitehouse, Elizabeth Warren and David Perdue — all members of the influential Armed Services Committee of the US Senate, which has legislative oversight of US military affairs — had also expressed a desire to visit the LoC.

According to ISPR statement, the delegation said, “Pak Army’s efforts are a great success story and strong Pak-US partnership is only way to succeed.”

Speaking at the event, Senator McCain stressed the importance of continued cooperation between Pakistan and Afghanistan.

"We talked about many issues, including the importance of Afghan-Pakistan cooperation and relationship along the border and we are confident that with the right cooperation and the right strategy, we can see success here in this very long struggle," he said.

The delegation was scheduled to visit the LoC later in the day, but the trip could not take place due to bad weather, a statement issued by Inter-Services Public Relations (ISPR) said.

The delegation was also briefed on socio-economic development efforts in the Agency, the ISPR stated in a series of tweets.

US delegation acknowledged and appreciated Pak Army's success and socio-economic uplift efforts. COAS thanked US for their support. (2 of 2) pic.twitter.com/eXACLpBqb4

The delegation had urged both India and Pakistan to resolve the Kashmir issue through dialogue and asserted that peace in Afghanistan could not be possible without Pakistan’s help.

Earlier on Sunday, the delegation also had a meeting with COAS General Qamar Javed Bajwa.