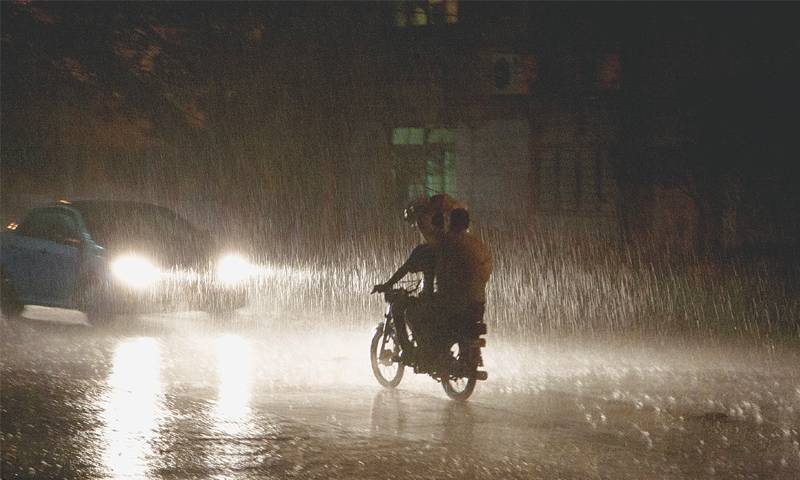 LAHORE - As the heavy rain is still continuing to lash Lahore among other cities of Punjab since Monday night, at least six persons have died in different areas of the city.

The city is also observing a blackout as over 150 electricity feeders tripped due to the rain. It has been observed that the city received a record 252 millimetres rain in a short span of time, breaking the record of past 38 years.

In 1980, Lahore had received heavy downpour, receiving 207 millimetres rain but the Water and Sanitation Authority (WASA) has confirmed Tuesday's downpour as the recording breaking for the metropolis.

The major roads have turned into pools as the stormwater drains are blocked, creating hurdles for commuters. A big sinkhole opened up on the Mall Road in Lahore.

Due to the rain, two people named Amanat and Shazaib were electrocuted in Rewaz Garden while a third person identified as Akber was electrocuted near Qurtaba Chowk.

Rescue officials said that two people were killed as the roof of their warehouse collapsed in Gumti bazaar due to the heavy downpour. Another person lost his life after being electrocuted in China Scheme area of Gujar Pura.

A warning was also given out for Lahore airport due to the weather conditions, stating that routine flight operations may be affected.

The Pakistan Meteorological Department (PMD) has forecast more rain in the next two days in Lahore and other cities of the country.

The situation prompted a storm on social media against the caretaker setup which was doing nothing to help people in such conditions, as the roads can be seen flooded with water everywhere in the city of Lahore.

The developed countries of the world like America, Japan and China too faced such problems after heavy rains in their regions, but they knew how to solve this issue, said people.

It's been reported that the former Chief Minister of Punjab Shehbaz Sharif would head the meetings himself in such disastrous conditions in his tenure as chief administrator.

No such action was taken this time by the administration, as no one knew what to do in such circumstances and the situation of the city was in front of our eyes.

The masses are calling for Shehbaz speed to handle this mismanagement in the beautiful city of Lahore.