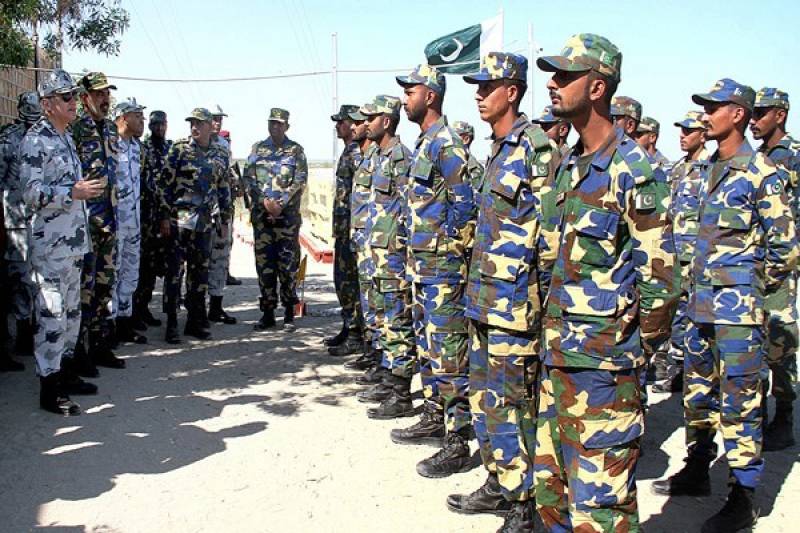 KARACHI - The passing out Parade of Pakistan Navy SEAL Course was held on Friday at PNS IQBAL, Karachi.

The parade comprised of officers and sailors, who completed rigorous training in conformity to set standards, said a Pakistan Navy press release.

Commander Coast Vice Admiral Faisal Rasul Lodhi graced the occasion as Chief Guest. While addressing the ceremony, the Chief Guest underlined that Coastal Command of Pakistan Navy has been entrusted to safeguard country’s Coastal Area from Sir Creek to Jiwani under the challenging security milieu. He further added that Pakistan Navy Coastal Command is fully geared up for the challenges related to CPEC and no stone will be left unturned for securing the maritime interests of Pakistan.

The Chief Guest while congratulating the parade expressed his hope that the addition of Special Operators in Navy’s offensive punch will surely enhance the capabilities of Special Service Group (Navy).

Later, the Chief Guest gave away prizes to position holders. The ‘Iron Man’ trophy for the overall best trainee of the course was awarded to Janbaz Asim Khan, whereas, Best Endurance Swimmer and Best Endurance Runner Trophies won by Janbaz Osama and Janbaz Ehsan Ullah respectively.

Due to COVID-19 pandemic, the ceremony was attended by a limited number of guests.