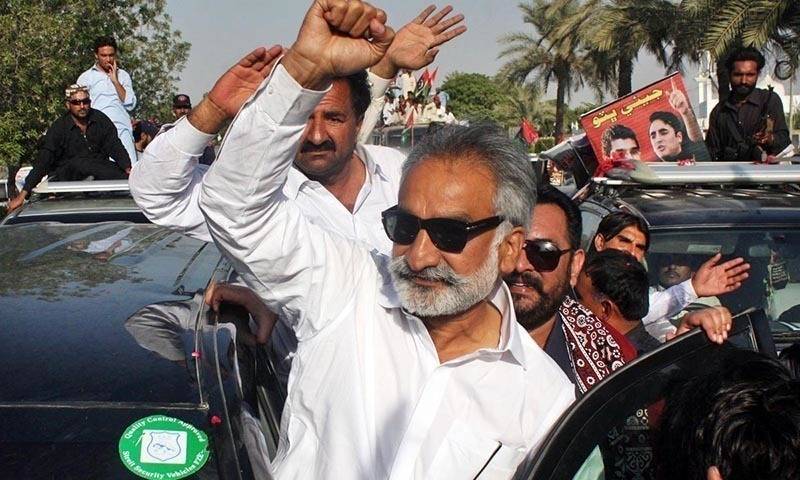 BADIN (Staff Report) - Badin police have registered cases against Sindh’s former home minister Dr Zulfiqar Ali Mirza, his 21 aides and supporters and 50 to 60 unidentified people under sections 365, 395 and 324 of the PPC and H2 and 6/7 of the Anti-Terrorism Act on charges of attacking a police station and forcibly shutting down markets in the district.

Nadeem Mughal arrested by CIA police earlier in the day on unidentified charges was freed by Dr Mirza’s supporters.

Dr Mirza had an exchange of arguments with DSP Samoon. He snatched the police officer’s mobile phone and threw it on the ground when he refused to order the registration of FIR.

Before going to the police station, Dr Mirza allegedly went to the shops of Taj Mallah and Imtiaz Memon, who recently joined the PPP. The shops, which remained open despite a shutdown strike, were locked by Dr Mirza’s guards and supporters.

Talking to journalists, Dr Mirza alleged that Nadeem Mughal had been whisked away at the behest of these people. He said he would go to any extent to protect his supporters from ‘wolves’.

He asked PPP Co-Chairman Asif Ali Zardari and functionaries of the Sindh government to rein in their men; otherwise he would drag them into the bazaars of Badin.

The crowd later dispersed peacefully after Dr Mirza announced that he would move court for the registration of FIR.

All markets and business centres were closed on a call for shutdown given by supporters of Dr Mirza and some disgruntled PPP leaders. Some of the protesters also fired shots in the air during the day-long tension in the town.

Meanwhile, hundreds of traders and workers of the PPP held a demonstration outside the Model Police Station. They were led by MNA Sardar Kamal Khan Chang, Taj Mallah and Imtiaz Memon who demanded registration of an FIR against Dr Mirza and his supporters for “terrorising people”.

Kamal Chang alleged that Dr Mirza and his men had acted like outlaws, broken the locks of shops and smashed the gate of the police station and beaten up traders and policemen.

The PPP leaders urged the party leadership to demand resignation of MNA Dr Fehmida Mirza and MPA Husnain Mirza if they failed to clarify their positions.

Policemen from different stations of the district were deployed in the town to avert any further conflict. The houses of people nominated in the FIR, except Dr Mirza, were raided.

Heavy contingents of police from Hyderabad, Tharparkar, Sujawal, Thatta, Tando Mohammad Khan and others areas started arriving in Badin. Sources said that Dr Mirza’s Morjhar farmhouse was likely to be raided for his arrest.

Dr Mirza told reporters at his farmhouse at night that a ‘peaceful’ shutdown would be observed on Monday. He said that if SSP Rao Anwar and SSP Badin Khalid Mustafa Korai came to arrest him he would fight them, adding that he could be arrested only by honest police officers.