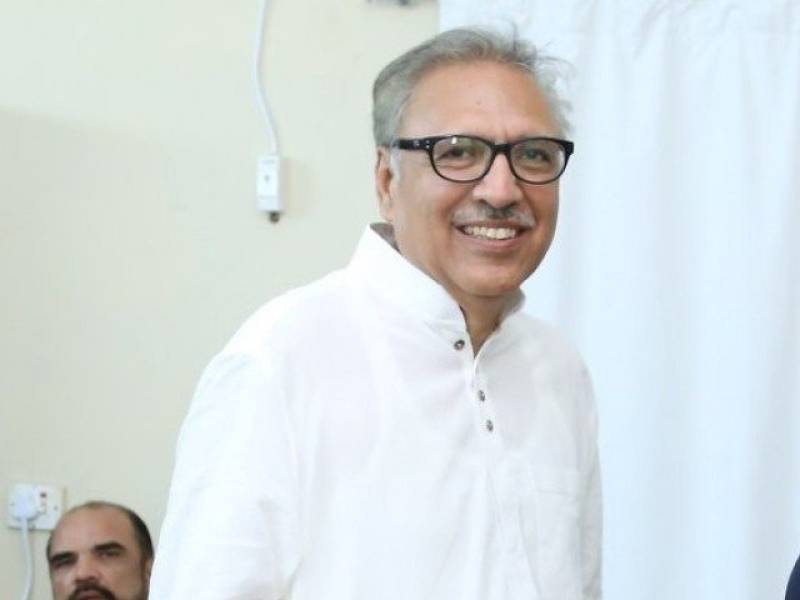 ISLAMABAD - President Dr Arif Alvi Tuesday stressed the need for enhanced and trust-based cooperation between the government and opposition to achieve the goal of country’s socio-economic development as “a national agenda,” while keeping their political differences aside.

“Before my election as the President of Pakistan, I met various political leaders including the PPP Chairman Bilawal Bhutto Zardari and PML-N President Shehbaz Sharif and told them that we can resolve our problems and reach the destination through cooperation with trust,” he said in an interview with PTV.

Dr Arif Alvi said though he was elected as the President of Pakistan with the support and nomination of Pakistan Tehrik-e-Insaf (PTI), but after taking oath of the office he was apolitical and represented the federation of Pakistan.

“As President of Pakistan, all the provinces, cities, and areas are now equal for me, and I have to and would be working and fulfilling my responsibilities within the Constitutional framework,” he added.

To a question about the government’s direction towards achieving its promised change of a “New Pakistan”, the President expressed his confidence that despite various challenges facing the country a “big change” was in the offing.

To another question about corruption, he said, there was a strong political will and serious efforts were afoot to tackle this menace.

The President, however, added that the fear of punishment, social pressures, fear of strict laws and accountability could serve as major deterrents in tackling the menace of corruption to a large extent.

In response to a question about the recovery of alleged billions of dollars looted money from home and abroad, he referred to some foreign reports which claimed that $ 10 billion were invested annually by Pakistanis in Dubai and hoped that with the improved investment climate in our country people would now prefer to invest in their own country.

“At present, Pakistan offers best investment-friendly climate with a lot of opportunities in various sectors of economy,” he added.

Asked about the effects of revised finance bill presented by the government in National Assembly on general public, the President said, as the country was facing economic challenges in the areas of current account, trade deficit etc., the government was taking some measures to improve the situation.

About the government’s austerity measures and not using the lavish state buildings as their residences including by the Prime Minister, he said though it was symbolic but reflected the Islamic values in which the leaders were considered as trustees of people.

In response to a question, the president said he and the prime minister did not like unnecessary protocols, but as far as the security of leaders was concerned, it could not be compromised.

The president said keeping in view the Constitutional limitations he wanted to work in the areas of health, education and women empowerment, adding he had invited the women parliamentarians for a meeting to discuss the issues like curbing breast cancer as well as the women inheritance.

To another question, he vowed to work for the problems faced by the people of Karachi like water, sanitation, cleanliness, transport and health in coordination with the federal and provincial governments.

The president, who was a dentist by profession, recalled his efforts for strengthening democracy in Pakistan and said as a political worker he used to participate in the protests against General Ayub Khan in the 1970s.

Later, the President said, he joined PTI as a founding member in 1996 and continued to work with Imran Khan to bring a change in the country.