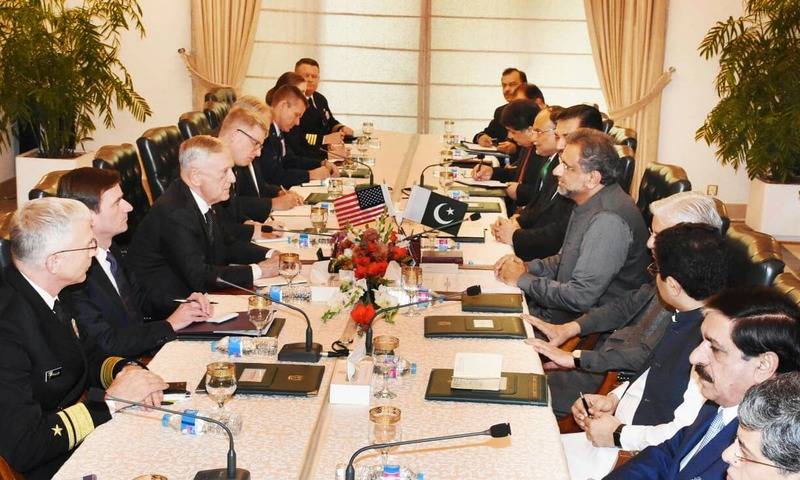 ISLAMABAD - Pakistan has emphatically stated that there are no terrorist safe havens in Pakistan and the entire nation is committed to its resolve of eradicating terrorism once and for all in all its forms and manifestations.

These remarks were made by Prime Minister Shahid Khaqan Abbasi during talks with US Secretary of Defense James Mattis in Islamabad on Monday.

Recalling the longstanding relationship with the United States, Prime Minister Abbasi underlined the need for a broad-based engagement to strengthen partnership and enhance cooperation between the two countries.

Articulating Pakistan's perspective on regional peace and security, the prime minister said that no other country benefits more from peace and stability in Afghanistan than Pakistan.

He also appreciated the US resolve not to allow the use of Afghan soil against Pakistan.

The statement quoted Gen. Mattis as saying that the purpose of his visit was to find common grounds in order to create a positive, consistent and long-term relationship with Pakistan. “He emphasised that in view of his long association with Pakistan, he was keenly aware of the sacrifices rendered and the lives lost in Pakistan’s fight against terrorism and extremism; and his personal respect and appreciation for the professional abilities of Pakistan’s armed forces,” the statement said.

According to a brief statement issued by the US Embassy late Monday, "Secretary Mattis emphasised the vital role that Pakistan can play in working with the United States and others to facilitate a peace process in Afghanistan that brings stability and security to the region," in his meetings with Pakistani officials.

"The secretary reiterated that Pakistan must redouble its efforts to confront militants and terrorists operating within the country," it added.

General James Mattis, US Secy of Defence met COAS at GHQ. Both agreed to work towards specific & sustained actions on each other's concerns. pic.twitter.com/2Lrrmi9u0q

Mattis said that Pakistan has done much more than its due share despite capacity constraints but shall remain committed for peace as a responsible member of international community.

He reiterated Pakistan’s support for peace and stability in the region, the necessity and right of Afghan refugees for a respectable and early repatriation and the existence of terrorist safe havens across the border in Afghanistan.

Despite the Trump administration’s continuous demand to ‘do more’, US Defence Secretary Jim Mattis said that the United States is “ready to play its role in addressing Pakistan’s legitimate concerns.”

“Pakistan has done much more than its due share despite capacity constraints but shall remain committed for peace as a responsible member of international community,” the chief of army staff (COAS) was quoted by the military’s media wing as saying.