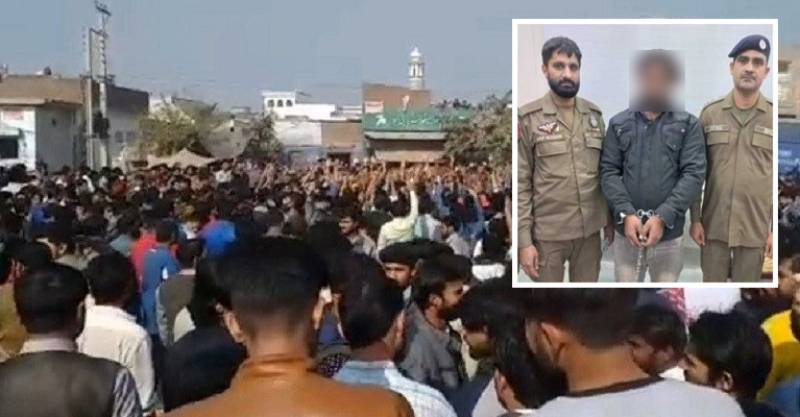 LAHORE – At least 120 people have been arrested in over 50 areas of Sialkot, a city in North-East Punjab after a mob killed and burned the body of a Sri Lankan national over alleged blasphemy allegations on Friday.

Reports in local media said the provincial administration has forwarded the initial report of the heart-wrenching incident to Prime Minister Imran Khan. The report sent to the premier mentioned that the cops have also detained the people who instigated protesters including the key suspect Farhan Idrees.

It also mentioned that the detained suspects have been shifted to unknown places for further investigation.

Meanwhile, another report submitted to Punjab CM Usman Buzdar cited that the factory manager earlier ordered the workers to clean the machinery as they were expecting people from abroad. The accused of blasphemy reportedly tore down stickers of a religious outfit pasted on a wall of the manufacturing unit.

The allegation of blasphemy spread among the charged workers who first protest on the road and then barged into the factory and tortured the victim to death.

Meanwhile, police officials are taking the help of mobile phones recordings to nab the culprits. The Special Branch, Counter-Terrorism Department, and other law enforcement agencies also conducted more than 50 raids while Gujranwala RPO and Sialkot DPO are overseeing the grisly murder investigations.

On Friday, Punjab Government Spokesman told media that the people who have been arrested were identified through CCTV footage.

Punjab Police also shared a tweet that includes two accused who earlier appeared in viral videos and supported the violence against the Sri Lankan national.

On Friday, angry workers of a garment factory brutally killed their Sri Lankan manager in factory premises and set his body on fire over blasphemy accusations. Clips doing rounds on the internet showed the mob first brutally beat up the foreign national, inside the factory and then dragged his corpse on the road and set it on fire.

Meanwhile, the post mortem of the deceased man was completed and the hospital returned the body of the foreigner to the law enforcers.

Following the tragic incident, a large number of social media users took to Twitter to condemn the brutal killing of the Sri Lankan national while activists questioned the policies of incumbent authorities.