Chris Gayle criticised for asking out journalist during BBL interview 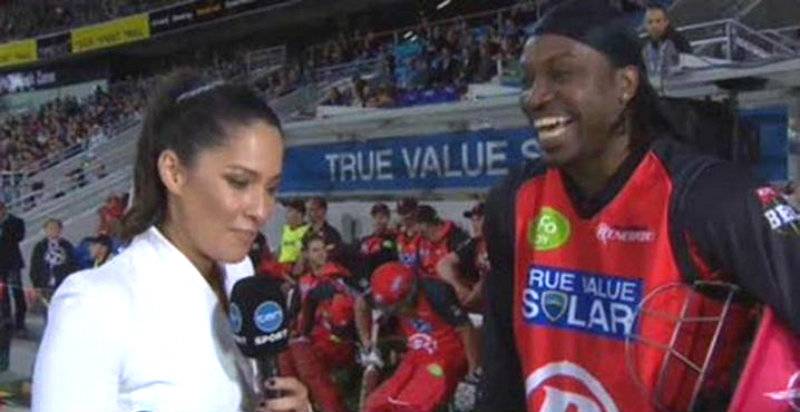 MELBOURNE (Web Desk) - West Indies batsman Chris Gayle has drawn criticism after asking a female reporter for a drink before telling her "don't blush baby" during a live interview.

Gayle had just been dismissed whilst playing for Melbourne Renegades in the Australian Big Bash League when he was interviewed by Channel Ten presenter Mel McLaughlin.

Whilst being questioned about his 41 run innings, Gayle asked McLaughlin out for a drink. The 36-year-old batsman then awkwardly laughed off the comment and told McLaughlin "don't blush baby"..

"Hopefully we can win this game and have a drink after. Don’t blush baby," Gayle said as McLaughlin avoided eye contact.

A laughing Gayle finally said "oh sorry" before McLaughlin crossed back to the commentary team.

McLaughlin replied by telling Gayle "I'm not blushing" before moving the interview back onto cricketing matters.

Gayle's comments were quickly criticised by many on Twitter, with former England captain Andrew Flintoff among them.

Well played @Mel_Mclaughlin !! Big fan of @henrygayle but made himself look a bit of a chop there @tensporttv#bbl05

Well played to our very own @Mel_Mclaughlin for staying professional during the interview. What a pro ?

Chris Gayle has a reasonably high opinion of himself it seems ....

Gayle, arguably the greatest West Indian player of his generation, is known for his party loving lifestyle. Last year, he had installed a strip club in his home.

Gayle posted a picture of the room in his house along with the message: "From the pool to the strip club...if u don't have a strip club at home, U ain't a cricket 'Player' .. I always make sure my guest well entertained and feel like they are at home #LifeIsForLiving#DreamBig"