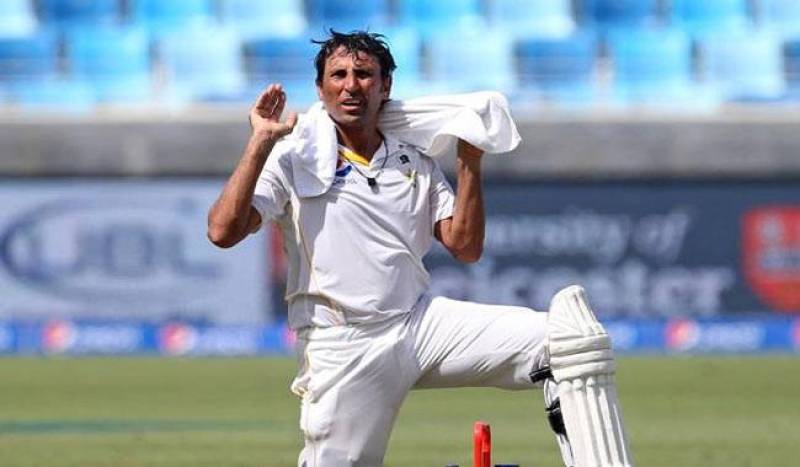 TAUNTON - Younis Khan made an unbeaten 99 while Mohammad Amir was left waiting in the wings as Pakistan launched their tour of England with 324 for five on the opening day of a three-day First-class match against Somerset on Sunday.

This was Pakistan´s first First-class match on English soil since their controversial "spot-fixing" tour of 2010.

During that year's Test against England at Lords, Amir and Pakistan new-ball partner Mohammad Asif bowled no-balls on the instruction of captain Salman Butt. They were later busted as part of a sting operation carried out by a tabloid newspaper.

All three received five-year bans from cricket and, together with sports agent Mazhar Majeed, jail terms.

However, Amir returned to international cricket earlier this year and could make his Test comeback at Lord´s, where Pakistan face England in the first of a four-Test series from July 14.

Although selected for the Somerset match, Amir's return to action in England was delayed when Pakistan captain Misbah-ul-Haq won the toss and batted.

"If he can perform against England, a top team, it will be very nice for him. Pakistan need him to bowl well and he´s shown what kind of character he has."

Happy man of the earth´

Experienced 38-year-old batsman Younis, who has had spells with several English teams including reigning county champions Yorkshire, added: "Any teams that come to England struggle against their bowling attack here.

"We know it won´t be easy, but we are prepared. It would be very fantastic for me (to win the series)," he added.

"If I perform, I will be the happiest man on earth," said Younis, who came in after Misbah fell for a duck, and stabilized the innings with Asad Shafiq (80), with whom he shared a fifth-wicket stand of 179.

Pakistan opener Mohammad Hafeez made a lively start as he hooked Somerset and Scotland paceman Josh Davey over fine leg and pulled him over mid-wicket for two sixes in as many balls.

But Dutch bowler Paul van Meekeren, who only joined Somerset last week, made the breakthrough when he bowled Hafeez for 20.

Pakistan were 79 for one at lunch but lost three wickets in the second session against Somerset´s multi-national attack that also featured a South African in paceman Tim Groenewald.

Azhar Ali (20) was well caught by diving wicket-keeper Alex Barrow off van Meekeren. Left-handed opener Shan Masood, missed on 17 and 39, batted attractively until he was lbw to Groenewald for 62.

Two balls later Groenewald had Misbah out for a duck with the aid of a fine slip catch by Tim Rouse.

The luckless Davey went wicketless after former England batsman Marcus Trescothick dropped a tough slip catch when Younis was on 20.

Younis went to fifty when he swept off-spinner Dom Bess, making his first-class debut, for a seventh four in 105 balls.

Shafiq also went to the landmark with his seventh four, but in 69 balls, when he late-cut left-arm spinner Jack Leach.

There was more bad luck for Davey when Younis' inside edge evaded the diving Barrow, when he was on 75.

Shafiq´s 120-ball innings ended when he was well caught by Bess at point off Leach.

It seemed Younis would get to his 53rd first-class century before stumps. But instead he was left one run shy of a hundred, with Sarfraz Ahmed (six not out) unable to get off strike.

This fixture is Pakistan's first of two three-day games before the first Test at Lord´s, with the Pakistanis also playing Sussex at Hove from July 8-10.