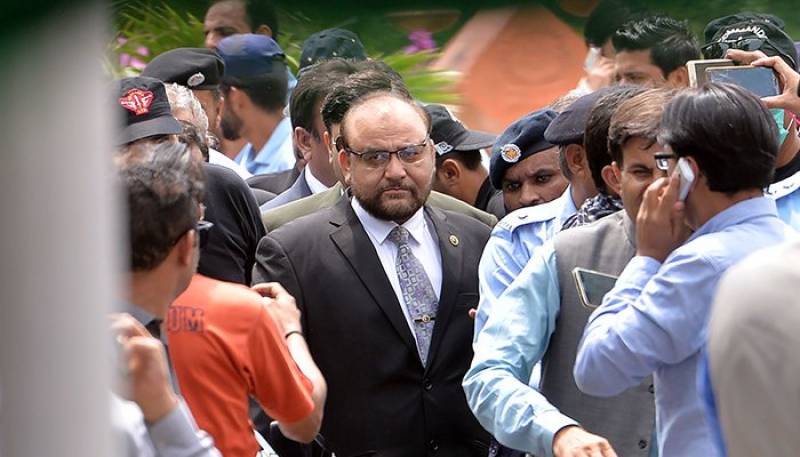 ISLAMABAD - The accountability court in Islamabad decided to seek another extension from the Supreme Court (SC) regarding the wrapping up of graft references filed against members of Sharif family.

During today's proceedings in the Al-Azizia reference, accountability court judge Mohammad Bashir remarked that he would write a letter to the apex court requesting another extension.

The Supreme Court in the Panamagate verdict had directed the accountability court to open references against former premier Nawaz Sharif and his family with special instructions to wrap up the references within six months.

The National Accountability Bureau had filed the references before the court in September 2017. When the SC-instructed six-month deadline expired in March 2018, a two-month extension was granted.

Moreover, the top court had added another month to the deadline last month on the request of the accountability court thus setting June 9th as the final deadline.

Currently, the court has so far finished recording the testimonies of Nawaz, his daughter Maryam and his son-in-law retired Captain Muhammad Safdar — all in the Avenfield property references.

The former premier is due to appear in at least another round of accountability court appearances in which he will be asked to record his statement in the Al-Azizia and Flagship Investment references.

The court is currently recording the testimony of Wajid Zia, the star prosecution witness in the Al-Azizia reference and the head of the joint investigation team (JIT) that probed the Panama Papers case.

After him, the prosecution will produce their final witness in Al-Azizia reference while at some point, Zia and the NAB officer in question will also have to testify in the Flagship reference.

Additionally, the recording of the final arguments in all three references is also on the agenda.

Former prime minister Nawaz Sharif and his daughter Maryam Nawaz appeared before the accountability court in Islamabad in the Al-Azizia reference filed by the National Accountability Bureau.

During today's hearing, Nawaz Sharif’s legal counsel, Khawaja Harris, is cross-examining prosecution’s star witness Wajid Zia in the reference filed against Sharif family, on the directives of the Supreme Court of Pakistan.

During the proceedings, Wajid Zia stated that the letter of credit regarding the Al-Azizia Mills mentions about the transfer of machinery from Sharjah to Jeddah.

To a question posed by Khawaja Haris, Zia replied that the letter of credit was received through Mutual Legal Assistance (MLA).

He negated the observation of Haris that a copy of the same Letter of Credit was provided to JIt by Hussain Nawaz.

Zia headed the Panama case joint investigation team (JIT) which probed the Sharif family’s assets last year, on the directives of the apex court and during the last hearing, he revealed that he did not come across any document during investigation showing that former prime minister Nawaz Sharif as the owner of Al-Azizia Steel Mills.

Former premier Nawaz Sharif and his family members are facing three corruption references in the accountability court — Avenfield Properties, Al-Azizia Steel Mills and Flagship Investments — in which they are accused of money laundering, tax evasion and hiding offshore assets.

Zia, who is appearing before the court of accountability judge Muhammad Bashir, has already recorded his statement in both Avenfield and Al-Azizia references against the Sharif family.

In an informal discussion with newsmen outside the accountability court, the former premier expressed that he was only responsible for PML-N's tenure.

“When we left, everything in the country was fine,” he said while responding to a question on the country's power crisis.

Sharif shared that the PML-N government, which completed its constitutional tenure on May 31, had generated additional electricity and inaugurated many development projects.

The country was in good hands when PML-N was ruling, the ousted premier claimed.