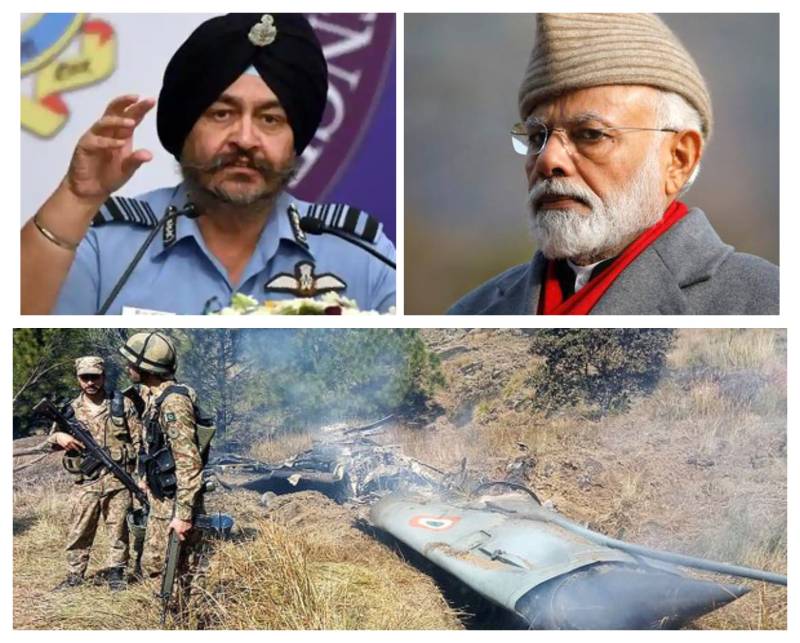 NEW DELHI – Top Indian air force officer on Monday once again boasted the claim of “successful” air strikes on the alleged camps of Jaish-e-Mohammed (JeM) inside Pakistani territory, without giving any details of casualties in the said ‘precise’ bombing.

India and Pakistan are amidst their biggest stand-off in many years, with the United States and other global powers mediating to de-escalate tensions between arch-foes who have fought three wars since their independence from British colonial rule in 1947.

Since Feb 26 when India violated Pakistan airspace by sending its 12 Mirage-2000 jets to carry out ‘surgical strikes’, New Delhi has failed to provide any credible evidence of destroying “terror camps of Jaish-e-Mohammed (JeM) near the northern Pakistani town of Balakot, about 40 km (25 miles) from India’s border in the Himalayan region of Kashmir.

“If we plan to hit the target, we hit the target,” Indian air chief marshal BS Dhanoa told reporters at a press conference in Coimbatore on Monday. "If we had dropped bombs in the jungle, then no need for him [Pakistan] to respond."

Shying away from answering the reporters’ questions like a ‘true soldier’, ACM Dhanoa only said that his force was not in a position to clarify the number of casualties.

“The government will clarify that. We don't count human casualties,” he said while dismissing accounts refuting India's version of its airstrikes in Pakistan.

The IAF chief further said he would not comment on an "ongoing operation", when asked about the aerial combat between Indian fighter jets and Pakistani planes that had crossed the Line of Control (LoC) on February 27, a day after India warplanes dropped their payload on few pine trees while escaping in haste.

What was the purpose then? Were you uprooting terrorist or trees? Was it an election gimmick?

Deceit possesses our land in guise of fighting a foreign enemy.

Stop politicising the army, it is as sacred as the state.

An IAF pilot, Wing Commander Abhinandan Varthaman, was also captured on the Pakistani side of the LoC after being shot down in a dogfight with a Pakistani fighter jet.

Though the Indian government, while calling the strike “a success”, has put out no official figure so far, Bharatia Janata Party (BJP) president Amit Shah on Sunday claimed that "250 terrorists have been killed". On the day of the strikes, a figure of 300 did the rounds but no one gave it on record.

Shah, who was addressing an election rally in Gujarat, said after the February 14 Pulwama attack in which over 40 CRPF men were killed, “everyone thought there could be no surgical strikes”. “But under (Prime Minister Narendra) Modi's leadership, the government carried out an air strike and killed more than 250 terrorists,” the BJP chief claimed.

He also hit out at the Opposition for demanding proof of the air strikes, saying such statements “brought a smile to Pakistan's face”. “If they cannot support the armed forces, they should at least learn to keep quiet,” he added.

Shah’s statements, however, did not go down well with the Indian National Congress, with senior leader Manish Tewari accusing the BJP of “milking” the air strikes for political gains.

Air Chief Marshal Dhanoa says IAF can not count the number of people dead in the Balakot airstrike but @AmitShah says 250 terrorists were killed ? Where did the BJP President get these numbers from he must explain ? https://t.co/U6QWErqycE

The 2019 Indian general elections are set to take place in April and May. Narendra Modi, who is seeking a second term as Prime Minister, launched his campaign in January. He faces opposition from Rahul Gandhi, leader of the opposition Indian National Congress party.

Elections are also due to take place in a number of India’s states and union territories.

‘No casualties in Balakot border breach’

The country’s former finance minister, P Chidambaram too said he was ready to believe the government but if the Centre wanted the world to believe the air strikes and their impact on terror camps in Pakistan, then Prime Minister Narendra Modi must desist from Opposition bashing. He also asked who had put out a figure of 300-350 casualties in the air strike.

As a proud citizen I am prepared to believe my government. But if we want the world to believe, government must make the effort, not indulge in Opposition-bashing.

Meanwhile, in a shocking admission, India’s Union Minister Surinder Singh Ahluwalia has said there were no casualties in the Balakot border breach. Talking to an Indian TV channel, Ahluwalia said the so-called airstrikes by India were just a warning. He also accused Indian media of putting unconfirmed and wrong figures of killings.

Not only that Indian authorities claimed to have carried out a successful air raid inside Pakistan, they also fantasized downing a Pakistani F-16 Viper fighter jet during the aerial engagement between the pilots of both sides.

Pakistan rejected this claim as well, saying that since it had not used any F-16 jets, the question of one being shot down did not arise.

A country with most fake news in the world

These lies from New Delhi are followed by a damning report that says India has more fake news than anywhere else in the world.

The survey by Microsoft’s Digital Civility Index, which covered 22 countries, reported that 64 percent of Indians had encountered fake news, compared to the global average of 57 percent.

54 percent of Indians had come across internet hoaxes, in comparison to 50 percent worldwide.

The survey also reported about online interactions in India and found 29 percent of people face “risks” from friends and family, one percent above the global average.

"Social circles became riskier in India," the survey said, adding the jump to 29 percent has taken the country a little over the global average.