Did police actually beat Nawaz Sharif's shoe thrower to death? Here's the truth behind the rumour on social media 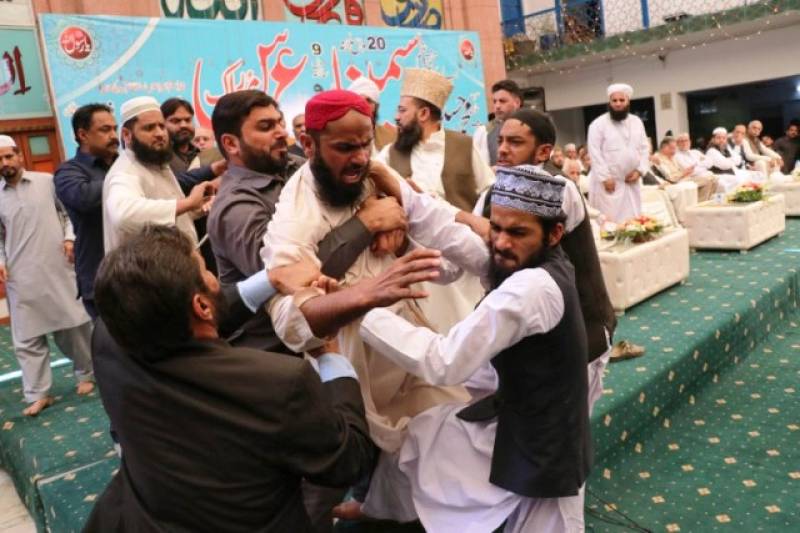 LAHORE - The Punjab Police extra-judicial role came under question on Sunday after rumours emerged on social media that the man who attacked former premier Nawaz Sharif with a shoe, was beaten to death.

The prime accused, identified as Talha Munawar was taken into custody seconds after he targeted Pakistan Muslim League Nawaz leader at a conference in Lahore, Social media exploded with reports that he was tortured and beaten to death for his action, by the law enforcers.

The social media buffs, who fired a broadside at the police for 'killing the accused' tried to bolster their claims by comparing the pictures of the man, held in jail with Talha Munawar, expressing that the detainee was not the actual shoe attacker.

The brouhaha diminished on Monday as soon as the police produced all the three accused -  Talha Munawar and two accomplices Sajid and Abdul Ghafoor - before the court where they were sent on 14-day judicial remand.

A video of the accused appearing before the court substantiates that all the three accused were hale, hearty and alive, however, the prime accused was reportedly admitted to Services Hospital on Sunday evening after he was thrashed by people in the Jamia Naeemia seminary.

According to Dawn News, the prime suspect and his two accomplices were booked today under Section 16 (Dissemination of rumours) of the Punjab Maintenance of Public Order Ordinance and Section 355 (Assault or criminal force with intent to dishonour a person, otherwise than on grave provocation) of the Pakistan Penal Code, read with Section 506 (Punishment for criminal intimidation).

The attack on Nawaz Sharif was widely slammed by all mainstream political parties, including Pakistan Tehreek-e-Insaf and religious parties calling for tolerance on varied issued from politics to religion.