Asia Bibi acquittal: State succumbs to might of Khadim Rizvi yet again 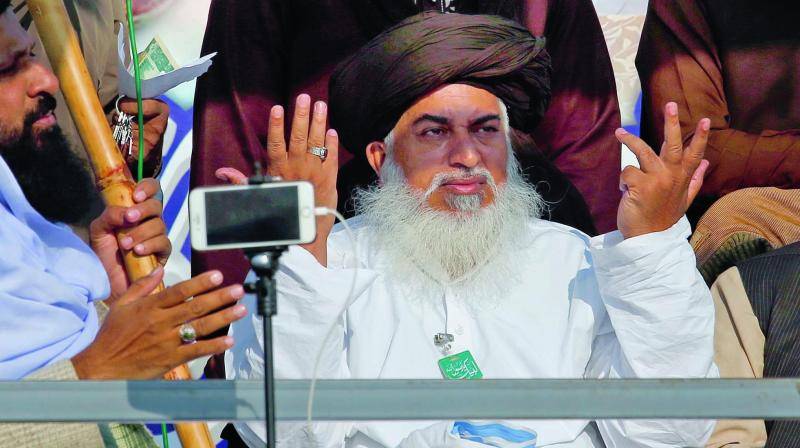 Spectators, mere spectators were the institutions and Parliament while citizens had to face the rage of religious extremists throughout the country. Pakistan was taken over by an organized radical group within two hours of the announcement of the judgement acquitting Asia BiBi, who was sentenced to death by Session Court and then by High Court and was behind the bars since 2009 on blasphemy charges.

Motorways were blocked; markets and fuel stations were shut. Above all, almost all the educational institutions had to suspend the learning process across the country. Only fear prevailed among the masses: fear of death, anarchy, civil war, looters and riots. But the most devastating part of this horrific episode was fear of being labelled as a ‘KAFIR’.

The nation observed inhumane, brutal and shocking scenes during the lockdown. Some of the scenes were extremely disturbing which depicted the mob looting the poorest while in others, the rich had to witness their vehicles destroyed by a mob apparently chanting the slogans of Islam. In one of the acts of plundering, a kid was, mercilessly, deprived of bananas which he was selling on a donkey cart in Sheikhupura.

That’s not all. The role that a state must play proactively to safeguard its peaceful citizens was altogether missing. What kind of governance is this? While people suffered on the roads, the state was a mere spectator. Federal Ministers’ conduct depicted as if they have no direct relation with those who were engaged in dialogues with the extremists.

Those members of the religious class who didn’t participate in the protest and vandalism also kept silence except a few religious scholars who spoke on TV but the selection of words and manner of deliverance vividly depicted that either they were forced to do so or they weren’t able to overcome the fear of life and being labelled as a Kafir.

News channels’ role was commendable during the whole episode and some of the anchors showed tremendous sanity as compared to some of the seasoned political leaders like Khursheed Shah (PPPP) who condemned the speech of the Prime Minister of Pakistan by calling it an aggression. PML N, yet again, failed to measure the sensitivity and kept playing politics on the issue. Their stance on talk shows was only adding fuel to the fire. Unfortunately, even after consistent vain attempts of the hosts some of the insensitive, injudicious and ignorant people kept spreading their illogical and unfair thoughts.

Apart from damaging properties of innocent people on roads, a battle took place on social media. Facebook and Twitter, particularly, became the most powerful tools of inciting violence, defaming and abusing the state organs as well as each other. The government of Pakistan allowed the fanatics to spread the hate speech. Moulana Khadim Rizvi exploited these social platforms to extend the Fatwas of Kufr and instigated the cooks, drivers and security personals of Chief Justice of the Supreme Court of Pakistan to slay the judges if they want to guarantee a place in paradise.

Every Pakistani is shocked after the hate speech spread by Tehrik e LabaikYaRasool Allah (SAW). Every Pakistani feels insecure in ‘NAYA PAKISTAN’. There are questions in their minds which must be answered by the state.

This isn’t the first time when Khadim Rizvi has used coarse language to successfully achieve his targets. Simultaneously, he fearlessly curses and threatens the higher judiciary but seems to be invulnerable, whereas political leaders are dealt with an iron hand on opinion against the judges in this country; TalalChoudry and Danyal Aziz were made accountable by Chief Justice Mr Saqib Nisar but Khadim Rizvi and his followers are too strong to be held accountable. This gives a clear message to the masses that the land of pure is governed by the Law of the Jungle where only weak is punished.

The pact between the Federal Government, Punjab Government and TLP is ample to endorse the idea that strong and powerful is above the law in Pakistan. Even the government is helpless. Not only it fears the outrage of Khadim Rizvi, it also surrenders all its powers by letting them harm the people at will.

What remains the value of the legislature if it discriminates the weak and strong? Pardoning and releasing all the terrorists clearly puts a question mark, why a huge amount of money is spent on elections if all the decisions are made through street power eventually?

When achieving the desired results is certain through agitation, lockdowns, hate speech and vandalism, is there any need of getting rotten before the courts of law which not only take a lifetime in making decisions but also fear the mobs.

There is no doubt about the sensitivity of the issue and love of the Prophet (SAW) is also essential for a Muslim. The writer himself is ready to sacrifice his life for the sake of Shaan e Mustafa (SAW) anytime but harming, plundering and looting the fellow countrymen is not a service to Islam.

Educating the children is mandatory to avoid the alike incidents but the state can’t leave the citizens vulnerable. It’s the state’s responsibility to provide security to the people notwithstanding the religion, sect, ethnicity or political viewpoint of the challenger.