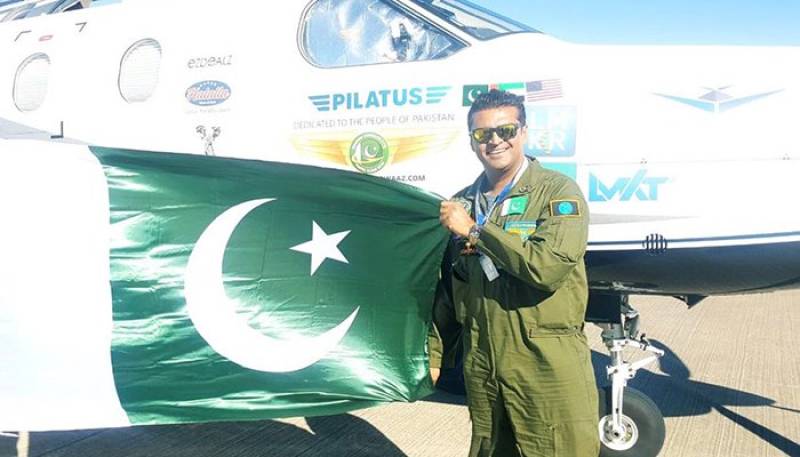 FLORIDA - Pakistani singer and activist Fakhr-e-Alam touch down in Florida in the early hours of Sunday morning to become the first Pakistani to circumnavigate the globe as part of his "Mission Parwaaz."

The singer posted the news on Twitter along with a video message after landing in Clearwater, Florida.

“Pakistan, Mission Parwaaz, Mission Accomplished we are now in the history books of aviation,” the 42-year-old singer wrote.

Pakistan #MissionParwaaz Mission Accomplished we are now in the history books of aviation.... pic.twitter.com/0x4rFsgwDi

"Thousands of nautical miles, hundreds of hours, 22 countries, 24 days one big dream for one big nation. Pakistan congratulations, we are now in the history books of aviation,” Fakhr said.

The 24-day tour which kicked off in Clearwater, Florida on October 10 has taken Alam to 22 countries.

From Florida, the 42-year-old had flown to Boston and then to the Canadian Airbase in Goose bay Canada and then to Greenland.

From Greenland, Alam flew to Iceland, United Kingdom, Egypt and then to Bahrain and then Dubai.

From Dubai, the singer flew to Karachi and then Islamabad and Lahore. From Lahore, he flew to Dhaka, Bangkok, Singapore, Jakarta and then Darwin in Australia.

The flag is up....it’s done...Pakistan congrats we have our 1st successful circumnavigation of the globe in any mode of transportation.... #MissionParwaaz pic.twitter.com/vgN0AXcGj1

Other countries where he made a pit stop included Philippines, Taiwan, South Japan, North Japan, the Pacific Bay, Russia and Alaska.