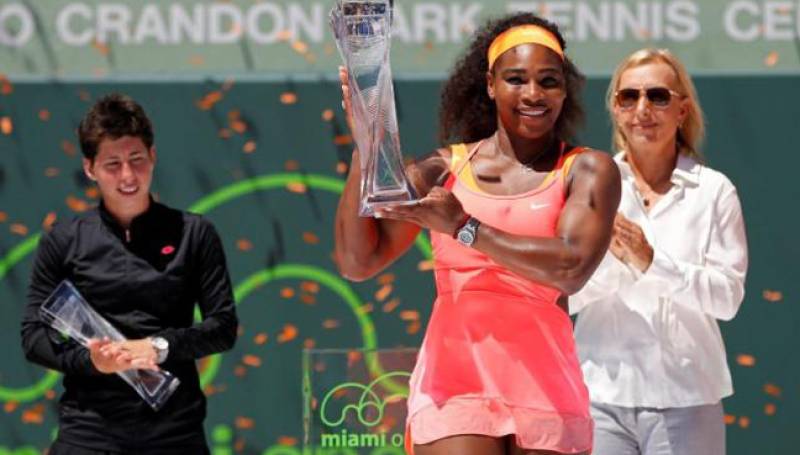 The 33-year-old US superstar, who won her 19th Grand Slam title in Australia this year, lifted the trophy in the elite premier level tournament for the third straight year, notching the 66th WTA title of her career.

Williams had already surpassed Steffi Graf for most Miami triumphs with her win last year.

On Saturday she joined Graf, Martina Navratilova and Chris Evert as the only Open Era players to win the same event at least eight times.

After clawing her way past world number three Simona Halep in the semi-finals, Williams played for the title against an opponent she had beaten in four prior encounters without dropping a set.

Suarez Navarro, playing in the biggest final of her career, found herself facing Williams at her most formidable.

Williams unleashed 29 winners with just 11 unforced errors. After struggling at times during the tournament with her serve, Williams fired seven aces and won 21 of 22 points on which she put her first serve in play.

It was an especially satisfying win for Williams, coming after a troublesome knee prompted her to forfeit her scheduled semi-final at the premier level tournament in Indian Wells a fortnight earlier.

Suarez Navarro lost her seventh WTA final in eight appearances. But her fine week in Florida, where her victims included Venus Williams, will see her break into the top 10 in the world rankings on Monday.