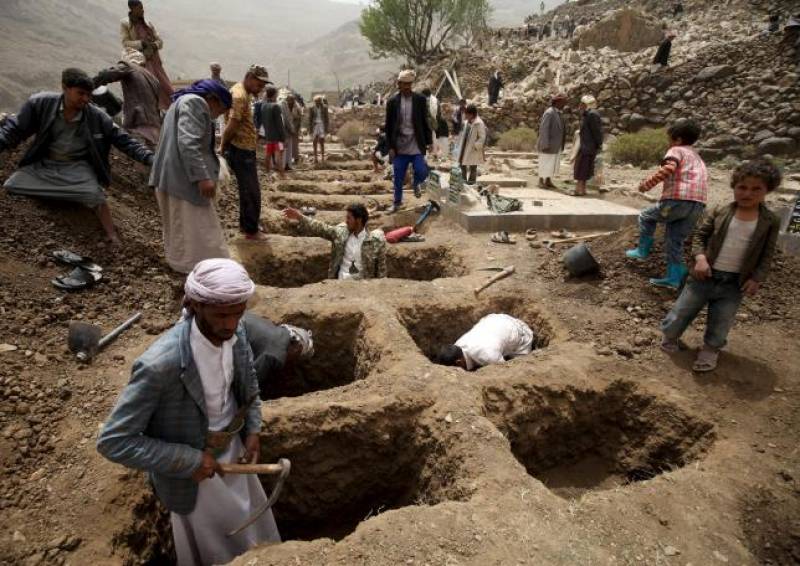 The council's president, Dina Kawar, who is also Jordan's UN ambassador, said members needed time to "reflect on the proposal".

Russia on Saturday distributed a draft resolution at the United Nations pressing for suspensions of the air strikes to allow evacuation of foreign civilians and diplomats, and demanding rapid and unhindered humanitarian access.

The draft, however, makes no mention of a halt to fighting by the Houthis. It also demands "rapid, safe and unhindered humanitarian access to ensure that humanitarian assistance reaches people in need".

Meetings on Saturday led to nothing concrete, but Ms Kawar said she "[hoped] that by Monday we can come up with something".

The air strikes against Houthi rebels continued for an 11th night on Saturday.

The Red Cross has called for a 24-hour ceasefire to bring in desperately needed medical supplies.

It says medical teams and rescuers must have access to Aden, a stronghold of those loyal to President Abdrabbuh Mansour Hadi, or more civilians will die.

"All air, land and sea routes must be opened without delay for at least 24 hours to enable help to reach people cut off after more than a week of intense air strikes and fierce ground fighting nationwide," the ICRC said in a statement.

The Houthis, who took control of Sanaa in September, have made significant gains in Aden, forcing President Hadi to flee to Saudi Arabia.

In the past few days, rebels pushed through to the heart of the port city using tanks and armoured vehicles. They were repelled from the presidential palace by loyalists supported by Saudi air strikes and weapon drops.

The Red Cross has reported a dire situation, with the streets of the city "strewn with dead bodies" and the wounded "streaming" into hospitals and clinics.

The United Nations says more than 500 people have been killed in the past two weeks in Yemen and nearly 1,700 wounded. Residents in Aden say parts of the southern port city have been without water or electricity for two days.

The toll does not include rebel casualties or victims of air raids, he added.

There was no sign of a halt in the fighting.

Aden residents said ships from the Saudi-led coalition bombarded Houthi forces who have taken over districts close to the center of the city despite Riyadh's military campaign in support of their foe, President Abd-Rabbu Mansour Hadi.

Hadi loyalists managed to push the Houthis and their allies from central Aden's Crater district on Friday, a rare victory after more than a week of gains by the Houthis, who are backed by soldiers loyal to ex-president Ali Abdullah Saleh.

Jets from the Saudi-led coalition parachuted weapons into Aden for a second day to bolster fighters loyal to Hadi, who fled Yemen 10 days ago and has watched from Saudi Arabia as the Houthis advanced on his supporters' last major foothold.

A military spokesman for the Saudi coalition said it was providing substantial logistical support for Hadi's fighters. He declined to confirm or deny reports that Saudi special forces were operating in Aden.

But a fighter in Aden, Khaled Ahmed Saif, appealed on local television for the coalition to send ground troops as soon as possible, saying the city was being subjected to a "genocidal war" by the Houthis.

Late on Saturday, Houthi forces entered the central Aden district of Mualla, where the port is located, and witnesses reported heavy fighting.

Residents said life was becoming unbearable. "How long can people live without water or electricity?" said Mohammad Fara'a. Another Crater resident, Hassan Abdallah, said people were using a long-disused well at one of the mosques to get water.

Near the capital Sanaa, an air strike on the village of Okash killed a family of nine people on Friday night, residents said.

Coalition spokesman Brigadier General Ahmed Asseri, asked about the calls for a humanitarian pause, said only that the military was ready for any instructions from its political leadership. He said aid agencies and governments should coordinate aid shipments with officials in Riyadh.

The conflict in Yemen has turned the impoverished Arabian Peninsula state into the latest theater for Sunni Muslim Saudi Arabia's proxy war with regional rival Iran, a struggle which is also playing out in Syria, Lebanon and Iraq.

Tehran denies Riyadh's charges that its arms the Houthis, who emerged as the country's most powerful faction when they took over the capital six months ago together with supporters of former president Ali Abdullah Saleh.

Saudi Arabia, unnerved by the growing power of the Houthis on its southern flank, launched military attacks on March 26. Saudi jets have been backed by planes from its Gulf Arab neighbours.

The United Arab Emirates state news agency said 100 Saudi aircraft were taking part along with 30 from the UAE, 15 each from Bahrain and Kuwait and 10 from Qatar.

The latest fighting is one of many conflicts in Yemen, where mass demonstrations inspired by the wider Arab uprisings of 2011 led to Saleh's resignation after three decades in power plagued by southern separatism, tribal unrest and al Qaeda militancy.

US military officers conducting a covert drone war against Al Qaeda in the Arabian Peninsula were withdrawn from Yemen last month, and the turmoil may provide the extremist movement with the chance to entrench or expand in the country's remote east.

Military sources said they faced relatively little resistance from soldiers in a nearby military base. Soldiers also withdrew from two towns - Shihr and Riyan - further up the Arabian Sea coast, highlighting the further collapse of Yemen's fragile central authority.

On Saturday, armed tribesmen in pickup trucks drove into central Mukalla, about 500 km (300 miles) east of Aden, to expel the Qaeda militants. They pledged earlier to restore stability in town.