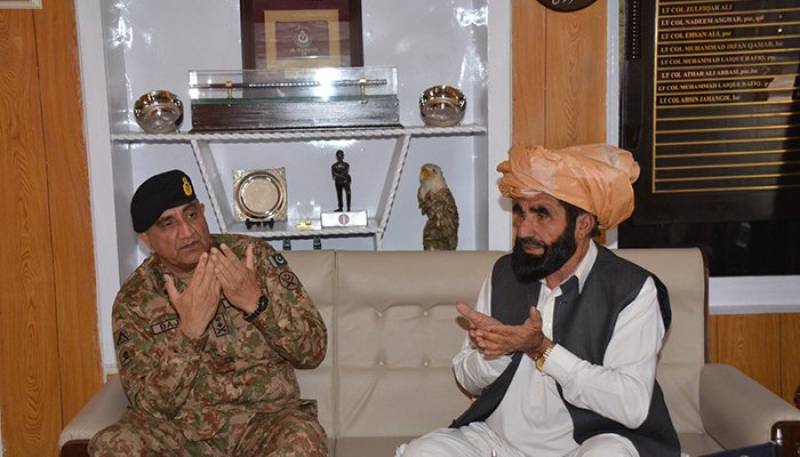 RAWALPINDI - The Chief of Army Staff (COAS) General Qamar Javed Bajwa on Thursday met the father of Naqeebullah Mehsud, who was killed in a fake police encounter in Karachi, condoled with him and offered Fateha.

In a statement issued by the Inter-Services Public Relations (ISPR), the COAS said that army would support all efforts to help him get the justice.

Speaking to the local tribal elders, General Bajwa said that [the country] is now in a phase of stability and development after facing difficult times during terrorism and operations against terrorists.

He urged to the local elders to not allow anyone to jeopardize the peace attained at a very heavy cost of blood and money.

The army chief said that the earliest mainstreaming of Federally Administered Tribal Areas (FATA) to the popular aspirations of the local tribes is essential for its development and enduring stability.

General Bajwa acknowledged the complete support of tribal brethren to the army and their resolve to maintain and strengthen the gains. The tribal elders thanked Pakistan Army for restoring peace and development projects and assured that tribes stand firmly with the army for the journey towards enduring peace.

Projects including the Agriculture Park at Wana and a market at Makeen, part of the socio-economic uplift program for FATA were inaugurated by General Bajwa. The projects were executed through by engineers of the Pakistan Army in collaboration with the government, the statement said.