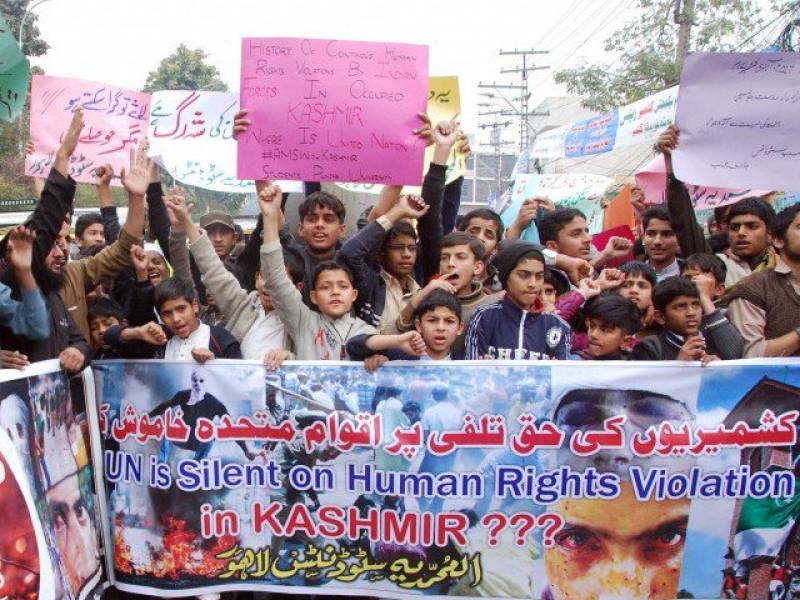 ISLAMABAD/LAHORE - Pakistan is observing Kashmir Day today (February 5) to show solidarity with the Kashmiris in their struggle for freedom.

A one-minute silence was observed nationwide at 10 am in tribute to the Kashmiri people on Kashmir Solidarity Day. Conferences, rallies, and protests are also scheduled for the special day.

People will also be forming chains by holding hands at locations that connect Kashmir and Pakistan, such as Azadpatan and Kohala and Mangla bridges.

In Muzaffarabad, students of the different school held a rally to express solidarity with their brethren in Occupied Kashmir.

Inter-Services Public Relations (ISPR) on Sunday also released 'Sangbaaz' – a song underscoring the Kashmir Day and struggles of the people – and said that “atrocities in Held Kashmir [Indian-occupied Kashmir] must stop. Kashmiris must be given their right of self-determination,” in accordance with the United Nations Security Council resolutions.

5 Feb...Solidarity with Kashmiris. Atrocities in Held Kashmir must stop. Kashmiris be given their right of self determination=UN Resolutions pic.twitter.com/b3VTJI89o4

In his message, Prime Minister Muhammad Nawaz Sharif said that Pakistan strongly condemns the systemic state terrorism and brutal killings of the innocent people of Kashmir by Indian occupation forces.

He said the dream of peace and prosperity of the people of this region will remain elusive without resolving this dispute.

He urged India to stop bloodbath in occupied Jammu and Kashmir and allow a free and fair plebiscite under the UN auspices.

On the occasion of Kashmir Solidarity Day, President Mamnoon Hussain and Prime Minister Muhammad Nawaz Sharif in their separate messages have called upon the international community to initiate an independent investigation in the ongoing gross human rights violations into Occupied Kashmir and fulfil its obligations under UN Security Council resolutions.

President Mamnoon Hussain in his message said that the government and the people of Pakistan reaffirm their continued and resolute moral, diplomatic and political support to the oppressed people of Occupied Kashmir in their valiant struggle for fundamental right to self-determination.

The Kashmir Solidarity Day has special significance this year because the recent uprising in Indian occupied Kashmir, following the July 8 extrajudicial killing of popular youth leader, Burhan Muzaffar Wani, has shaken the conscience of the international community.

The minister said that India would not be allowed to join CPEC if it continues brutalities in Occupied Kashmir. Pakistan calls upon the international community to be cognizant of its responsibilities in the matter and urges it to demand an independent investigation into the ongoing gross human rights violations in IoK by Indian occupation forces and to fulfil its obligations under UN Security Council Resolutions of Kashmir.