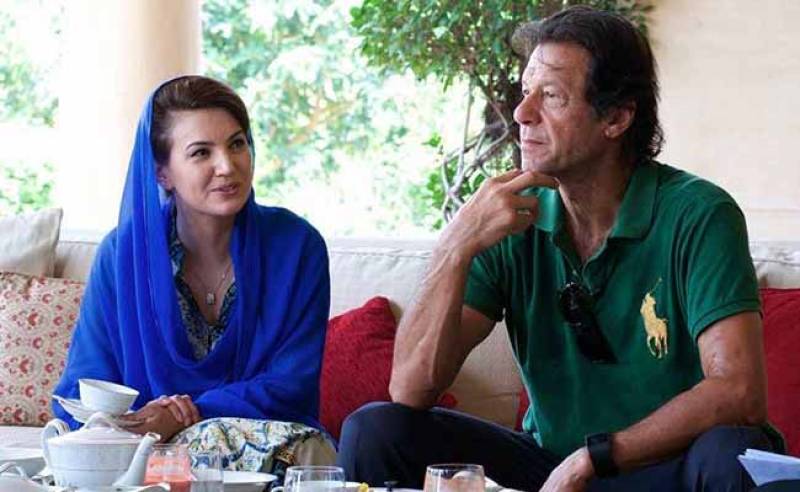 ISLAMABAD - Reham Khan's purported book is sending shock waves across Pakistan generally and across Pakistan Tehreek-e-Insaf specifically for the 'damaging' content enclosed in the piece.

Imran's former wife has not only blown the lid off her relationship with PTI chief but has also shared observations regarding the national issues and the role of state institutions in the country.

Reham Khan shared in the manuscript of her book that one of the accusations that Imran Khan levelled at her to a mutual friend was that she had been on the ISI payroll, as well as been openly having an affair with an ISI major.

The former BBC presenter shared that Imran Khan would shout out

accusations on the phone to their mutual associate.

"That man, Zaheer ul-Islam, allegedly walked out of the meeting in disgust saying later to someone, 'This man is a raving lunatic!' and refused to meet IK again," Reham highlighted in the book.

Besides censuring Imran Khan, Reham Khan did not spare her fellow journalists and a special portion of the leaked book is dedicated to the murky wheeling and dealing of the TV anchors with a special reference towards the role of ISI.

Reham shares that her mother and sister had made homes in Bahria Town, saying she had a vague idea that Malik Riaz was rich influential and that everyone from the anchors to the politicians lived off his handouts.

She contends that she either successfully avoided all offers to do agenda-driven content or was not considered ideal for such tasks.

The former journalist shared that she never received any offer of 'lifafa' during her stint as a journalist but claimed that the media wing of the ISI made brief contact but she showed a clear disinterest.

Reham also boasts that she was possibly the only anchor

and politically-linked individual in Pakistan who never met or spoke to Malik Riaz either, which remains true to this day.

Reham observed that as she started working in Pakistani media, she realised that everyone on TV had a financial feed other than their salaries.

"Most of the well known anchors were romanced by the intelligence services media wing. A few feeble attempts were made to contact me too but my blunt approach soon crushed these efforts," claims Reham in the excerpt leaked online.

The former journalist explains that as she did not entertain men in the office, a lady was sent for an initial assessment which then asked her to meet her senior.

"A dark tinted Mercedes was sent for me. I met a col ranking officer. He came in with a rather arrogant air about him. He was clearly used to people sucking up to him," elaborates Reham.

Imran's former wife also observed that as she cut him to size, he became rather friendly and offered her a full protocol tour to Gilgit

Baltistan which she declined saying that other female anchors who had taken up this invitation had to face rather rude insults by fellow colleagues.

"The col was shocked by my refusal to toe the line. In a couple of weeks he tried a different approach. He invited me to a thinktank of a lady friend of his. Over a lovely spread for tea we had a frank discussion this time," wrote Reham.

According to Reham, the ISI officer explained why he wanted well-spoken women like her.

"Col Sb you have so many already. I added mischievously that you don’t have the size of plots that could tempt me. You have given all the good ones to our top anchor," said Reham to the ISI Colonel following which he burst out laughing.

Reham Khan shared that like many others, anchors also considered her in Jahangir Tareen's camp.

"Since Jahangir was happy to pour money into the media, with anchors regularly coming in and out of his F6 home, he had perhaps created this myth himself," penned the former BBC presenter.

Who Slept With a TV Anchor

Reham Khan's book has become controversial even before the release as she has made blunt remarks in the book.

One such incident relates to a TV anchor, Reham did not mention, who took a different line than PTI's one but after having spent a night with an operative and having being captured in a compromising video, changed his stance.

Though Imran's former wife has not provided the name of the anchor but added that he was a sensible and highest ranking presenter.

She explained that during her stay at Banigala, journalists, channel owners and TRP manipulators sat in Imran's home, guiding him and taking guidance from him.

"His private ATM's paying their salaries. It was an open secret," alleged Reham Khan and added that  the other parties did not have as much financing as PTI.

She elaborated that 'comedians' apologised to her in person and explained that they were given ultimatums if they dared to go against policy.

After having fired a broadside at the fraternity of media presenters, Reham Khan somewhat lavished praise on ARY News anchor, Kashif Abbasi, for not to have been convinced by Imran Khan's political acumen.

"Kashif Abbasi seemed unimpressed by the Leader and appeared as

exasperated as me with the lack of knowledge and political acumen on display," wrote Reham in the book.

She continued that once Kashif Abbasi whispered that he was not prepared to be ruled by a daft leader to which she nodded and caught sight of Imran taking interest in the interaction.

"As soon as I caught his eye, he averted his gaze," states Reham Khan in the much-awaited book.

Apart from the top brass of male anchors, Reham Khan also shared her observation regarding the female anchors in the industry, alleging them of having received explicit content from Imran Khan.

She shared that when her film producer disclosed this, Reham dismissed it as a vicious rumour, wondering 'why someone of his stature would take a risk like that'.

Reham Khan has visibly weighed in on the discussion whether Imran Khan is an operative of the Yahoodi lobby or zionists who want him to steer the country, throwing weight behind the assertions.

Reham shares that Imran Khan was close to Kate Rothschild as she was devastated when the rapper she fell in love with, converted to Islam and refused to continue the affair with her.

The former journalist then shares that since the Rothschilds were known for being active Zionists, it might be the surname that caused conflict in Kate's relationship as one of their ancestors, Walter Rothschild, was responsible for drafting the declaration for a Jewish homeland in Palestine in 1917, which came to be known as the Balfour declaration.

Reham also found it strange that Imran censured the Americans, while sharing close ties with those who had a clear interest in

"Imran was also very close to his brother-in-laws, particularly Zac. Imran maintained that in a violent argument once where Imran slapped Jemima, it was Zac who asked Imran not to divorce his sister," states Reham.

According to Reham, Imran had impressed upon her that it was not his ex-wife but her family he was good friends with.

Reham alleges that Imran's father-in-law was a tycoon who also designed Imran's future.

Reham elaborates that a few days before the divorce, someone told her a story of a sensitive meeting and soon after the divorce, she requested an interaction with the religious scholar at the centre of the story.

According to Reham, that scholar was told by a former foreign minister about a 1990s meeting which was also confirmed by powerful former DG ISIs.

"He confirmed to me that the story I had stumbled onto about Imran's connections with the Americans was indeed true," claims Reham.

She continues that back in 1996, a meeting between the late foreign minister Sahibzada Yaqub Khan and Henry Kissinger had a third party in it - Sir James Goldsmith.

As per Reham's observations, the Pakistani foreign minister was categorically told by Kissinger "Look after our boy" in a reference to "Imran Khan".

Reham shares that she had started reading up about James Goldsmith during er marriage, and stumbled on an article by David Goldman in which he wrote: "Sir Goldsmith created an elaborate network of puppets in Britain and the US to create an elaborate cash laundering network in the United States between 1981 and 1983".

Reham continued that reportedly the fictional character of corporate raider Sir Larry Wildman in the American film Wall Street was based on James Goldsmith.

of the state department and the chief protégé of Henry Kissinger was, for a long time, employed by Goldsmith.

She also shares that Imran Khan hated Jemima's phone calls, and cursed her after each one, but could not avoid that as it was a 'stronger hold', contending that it made complete sense after realising that James Goldsmith had always been politically active, and had even founded his own party in the 90's called  the Referendum party.

"It was a single issue Eurosceptic party which laid the foundations of Brexit. Before him, his father Frank Goldsmith had been a prolific Jewish politician as well. Frank, a hotelier of German descent, had been a Conservative MP," explains Reham Khan.

Imran's former wife shares that besides his portfolio of 48 hotels, he was known for being one of the founders of the King David Hotel in East Jerusalem and over 46% of the hotel was funded by notable Jews.

During the six-day war, the hotel was extended, claims Reham Khan.