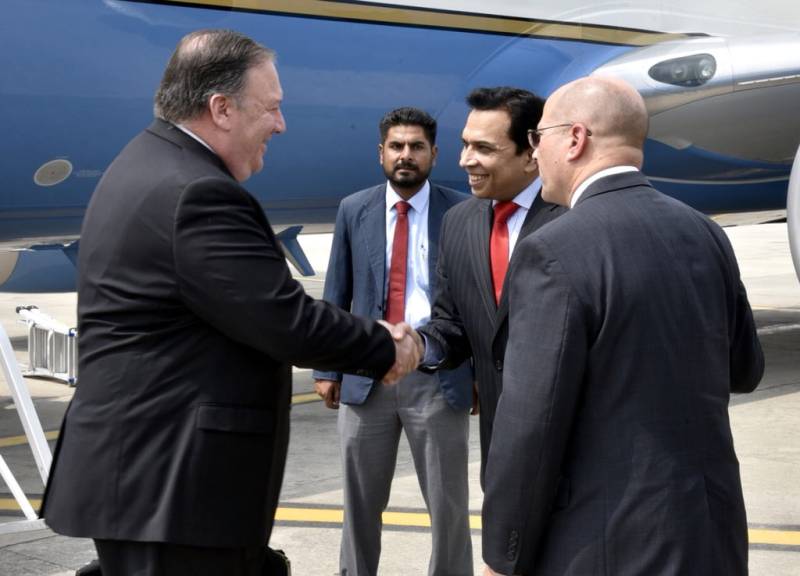 ISLAMABAD - US Secretary of State Mike Pompeo arrived in Pakistan on Wednesday on his one-day visit to hold key bilateral talks with the newly elected government of Pakistan Tehreek-e-Insaf (PTI).

Pompeo is accompanied by General Joseph Dunford, the chairman of the US Joint Chiefs of Staff (JCS) and other officials. This is first high-level foreign delegation visiting Pakistan after Imran Khan assumed prime minister office after bagging victory in July 25 elections.

The meeting between the US official and Pakistan's Prime Minister Imran Khan is scheduled at 4 PM at the PM Office today.

The visit of the US delegation has significance as it is going to happen at a time when the relations between both countries are at the standstill due to undue pressures from the Trump administration on Pakistan to do more.

The visit also comes days after US military said it has made a final decision to cancel $300 million in Coalition Support Funds (CSF) to Pakistan that had been suspended over alleged failure to take decisive action against militants, in a new blow to deteriorating ties.

The American delegation will hold formal talks with Foreign Minister Shah Mehmood Qureshi and his team at the foreign office.

The visiting official talking to media before leaving for Islamabad expressed hope to reset the relations between the two countries.

“We will have three opportunities to walk through the complexity that is this relationship and hopefully begin to make some progress so that we can get back to set of common understandings. So that’s really the very straightforward objective,” Pompeo said.

Pompeo, according to a private news channel, also hinted at releasing aid to Pakistan that was stopped by Trump administration last year.

“We need Pakistan to seriously engage to help us get to the reconciliation we need in Afghanistan," he said.

Last year, President Donald Trump unveiled his South Asia policy with an aim to end the 17-year-long war with the Taliban in Afghanistan, but his policy caused an escalation in relation with Pakistan when he accused Islamabad of covertly supporting the militants.

Pakistan consistently denies it is providing shelter to insurgents in the country. Islamabad has been pushed Washington to head towards negotiations with militants to end the war as the use of force could not yield any results.

On September 2, Shah Mahmood Qureshi said that Pakistan will promote relations with the US based on mutual trusts, respect and dignity.

US Secretary of State Mike Pompeo is visiting Pakistan on September 5. We will present our point of view to the US diplomat,” FM Qureshi said.

ISLAMABAD - Foreign Minister Shah Mehmood Qureshi says Pakistan will promote relations with the US based on mutual ...

“We will try to revive the stalled bilateral ties according to the principles of mutual respect and understanding.”

Qureshi over the suspension of the CSF said the US stoppage of $300 million was the money it owed to Pakistan in Coalition Support Funds (CSF), adding that it cannot be described as American aid.

“It was not aid. It was our money which was spent on the country’s participation in the US war against terrorism," he said.